joined the Army on 08-08-1914 as a war volunteer with the 7th Württembergisches Infanterie-Regiment “Kaiser Friedrich, König von Preußen” Nr. 125

, age 18. From Mai 1915 he came on the front of the first war with this regiment and already on 02-08 1915 promoted to Leutnant. Not only wounded in the war but also awarded with the wounded badge in black

and both the Iron Crosses and some other awards. He was allowed in the new Reichswehr, became a Major on 01-11-1935, Oberstleutnant on 01-10-1938 and at the time of the mobilisation he was situated in the West, along the river Upper Rhein. In November 1939 he as commander of the 12th Army was transferred to the Westerwald and later in the Eiffel as Replacement Forces. In the spring of 1940 he led this Army in the invasion of Holland and Belgium and crossed the river Maas between Deville and Braux. He was appointed as commander of the 56th Infantry Regiment

. A new assault brought the regiment up to the river near Pouilly. Here he earned the claps of the Iron Cross. His forces remained in France as a occupation Army until March 1941 as he was transferred to Neidenburg in East Prussia for the Operation Barbarossa. He led his forces in battles over the river Njemen and in the west of Lida and was highly appreciated and was awarded now with the Iron Cross of the Iron Cross and announced in the Wehrmacht Official Report for his bravery. Promoted now to Oberst on 01-10-1941 he with his forces had great amount of loses in the battle for Moscow. He was transferred to France and had to leave behind all his heavy equipment. His division was converted to a light division until February 1942 and renamed in the 56th Jäger Regiment send in a hurry to support the 16th Army of the Army Group North under Generalfeldmarschall, Ernst Busch

. He was involved in the heavy battle of Staraja Russa and the XI Army Corps under General Joachim Kortzfleisch

was surrounded near Demjansk. Thumm here with General Karl Allmendinger

had to relieve the XI Army Corps and was in battle for several months.

by order of the OKH on 06-07-1942 and continued his assault widening the pocket of Demjansk. For his leading he now was awarded with Oak Leaves of the Iron Cross on 23-12-1942. Promoted to Major General on 01-03-1943 with the command of the 5th Jäger Division. At the end of March 1943 in retreating battles the loses were so extensive that the division had to be refreshed in April 1943, west of Staraja Russa and stayed there until December 1943. Promotion to Lieutenant General followed on 01-09-1943 and involved in retreating battles between Witebsk and Orscha. the youngest Lieutenant General in WWII, with 36, was Theodor Tolsdorff,

the youngest General, with 42, Walter Wenck,

the both survived the war. Transferred in a hurry to the region of Brest Litowsk to support the 2nd Panzer Army

Thumm on 01-11-1944 was appointed as commander of the LXIV Army Corps, he succeeded General der Infanterie, Otto Lasch

in the Elsass, France. He became a General of the Infanterie 01-01-1945 and Commanding General of the LXVI Army Corps. When he denied an order of SS Reichsführer, Heinrich Himmler,

the retreated the Hitler Youth units from the front without permission, Thumm lost his command on 20-01-1945 and charged by the Reichs War Court. 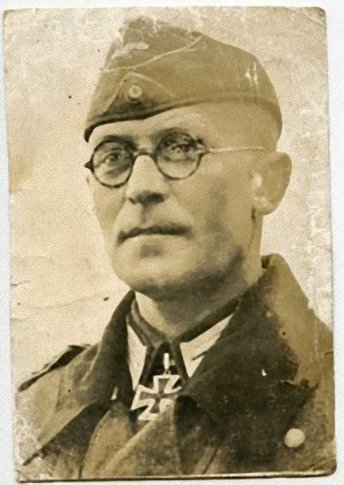 The surrender of Germany prevent a condemnation but now he landed in Allied captivity until 25-10-1947. Living in Welzheim, Hellmuth Thumm died at the old age of 81 on 13-07-1977 and is buried on the Old Cemetery of Welzheim.