Roosevelt, Quentin, born 19-11-1897 in New York City, was the youngest child of Theodore Roosevelt’s household, which included half-sister Alice, sister Ethel, and brothers Theodor, J. Kermit, and Archibald “Archie”. Quentin was only three years old when his father became president, and he grew up in the White House. By far the favorite of all of President Roosevelt’s children, Quentin was also the most rambunctious. He was nicknamed “Quentyquee” and “Quinikins” by his father. He shared T.R.’s physical, intellectual, and linguistic characteristics. As a young man, Quentin displayed a natural mechanical aptitude

e could fix almost anything, and even rebuilt a motorcycle to present to a friend as a gift. Quentin attended the Episcopal High School in Alexandria, Virginia. Later he was a student at Groton School and the Evans School for Boys. Quentin sailed through all his formal schooling, consistently scoring high marks and showing much of the intellectual capacity of his father. He was admitted to Harvard University in 1915. Quentin loved machinery and rebuilt a motorcycle while in college.

With American entry into World War I, Quentin thought his mechanical skills would be useful to the Army. Just engaged to Flora, he dropped out of college to join a newly formed army aviation unit in the Army Air Service. He trained on Long Island at an airfield later renamed Roosevelt Field in his honor. Finally sent to France, Lieutenant. Roosevelt first helped in setting up the main USAS training base at Issoudun. He was a supply officer and then over time ran one of the training airfields. Eventually he became a pilot in the 95th Aero Squadron, part of the 1st Pursuit Group. On July fourteenth, 1917, seven German chasing planes were attacked by a superior number of American planes north of Dormans. After a stubborn flight, one of the pilots – Lieutenant Roosevelt,—who had shown conspicuous bravery during the fight by attacking again and again without regard to danger, was shot in the head by his more experienced opponent and fell at Chamery.”

The German pilot who shot down Quentin Roosevelt told me of counting twenty bullet holes in his machine when he landed after the fight. He survived the war but was killed in an accident while engaged in delivering German airplanes to the American Forces under the terms of the Armistice. Funeral services held by the Germans were witnessed on July fifteenth by Captain James E. Gee of the 110th Infantry, who had been captured and was being evacuated to the rear. Captain Gee passed through Chamery, the little village near which the plane crashed to earth. On July 18, in a great allied counter-attack, the village where Quentin fell was retaken from the Germans, and his grave was found by some Americans soldiers.

At its head was a wooden cross.

When the World War II American Cemetery was established in France at Colleville-sur-Mer, Quentin’s body was exhumed and moved there. 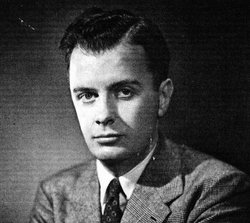 He is buried next to his brother Brigadier General Theodore ‘Ted” Roosevelt Jr., who had died of a heart attack in France shortly after leading his troops in landings on Utah Beach on D-Day as Assistant Commander of the 4th Infantry Division, nickname “Ivy Division”