and went to school  in Haapsalu. He joined the Russian Emperial Army on 01-08-1907, age 21, in the 141th Company Mozaiski. He followed the Military School in Tifilisi from 06-08-1911 and joined the 8th Telegraph Battalion. He was fighting in the first war as a captain in the Estonian Army. He received the Estonian Cross of Liberty on 12-02-1920. He went to England, Chatham for a study until 1924 and back in Estonia he joined the Army again as a Colonel and Inspector to 1939. Rieberg joined the German Army in 1939, with the 1st Estonia Brigade

War II losses in Estonia, estimated at around 25% of the population, were among the highest in Europe. War and occupation deaths listed in the current reports total at 81.000. These include deaths in Soviet deportations in 1941, Soviet genocides, German deportations, and Holocaust victims. Rieberg became a Major General in Mai 1941, age 55 in Heeresgruppe B under General Field Marshal der Infanterie, Fedor von Bock

and was Commander of the 172nd Infantry Division. Rieberg was involved in battles for the Siegfried Line “Westwall” and the Rhine fortresses area. In 1944 he came to Heeresgruppe Nord under Field Marshal der Panzertruppe, Walter Model

After the war Rieberg stayed in Germany and living in Baden Baden, Rieberg was married with Margot, born Mend.

The couple had three children, Winifred

Woldemar Rieberg died age 66, on 21-09-1952 and is buried with his wife  who died at the very old age of 102, on the Hauptfriedhof of Baden Baden. On this cemetery are also buried Stalingrad famous General Field Marshal der Panzertruppe, Friedrich von Paulus 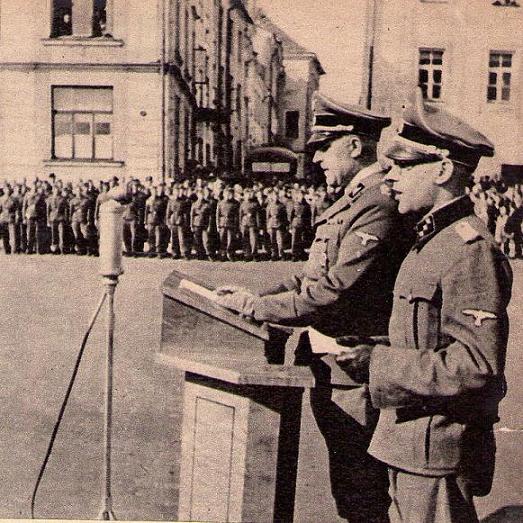 Before the Estonia Brigade left for Tallin.