Probst, Christoph Hermann Ananda, born, 06-11-1919 in Murnau am Staffelsee to Hermann and Katharina Probst. His father, Hermann Probst, was his greatest influence. Hermann Probst was an independent scholar of Asian culture and Eastern religions, who specialized in the study of Sanscrit.

He had one sister Angelika born 07-04-1918     Christoph prospered in the intellectual climate of his father’s home. Christoph’s parents divorced when he was very young and his father remarried only to later commit suicide when Christoph was a teenager. While at secondary school he met Alexander Schmorell

and the two friends both enrolled as medical students at the University of Munich. Christoph Probst was regarded by the other members of the White Rose as being very mature for his age. “Christl admired and greatly respected his late father, a self-taught scholar. It may be that his father’s early death accounted in large measure for Christl’s exceptional maturity. He alone of the group of students was married.  He married Herta Dohrn and over the next couple of years the couple had three children.

They had a son, Michel “Micha”. Alex Schmorell,

, Jürgen Wittenstein was born in Tübingen, on 26th April, 1919. His mother, Elisabeth Vollmoeller, was a successful businesswoman; his father, Oscar Wittenstein, a doctor of chemistry, concert pianist, and aviation pioneer, died six months before George’s birth while testing an airplane. Jürgen survived and immigrated to the USA, to form the White Rose. The group decided to adopt the strategy of passive resistance that was being used by students fighting against racial discrimination in the United States. He married the sister of Hellmut Hartert, Elisabeth Hartert.

With her he had four children. After the death of his wife he married the German-born Christel Bejenke. Jürgen returned to Germany and died 96 on 14-06-2015 in Tübingen, he had luck to escape.

calling for the restoration of democracy and social justice. The leaflets were at first sent anonymously to people all over Germany. Taking the addresses from telephone directories, they tended to concentrate on mailing university lecturers and the owners of bars. In Passive Resistance to National Socialism, published in 1943 the group explained the reasons why they had formed the White Rose group: “We want to try and show that everyone is in a position to contribute to the overthrow of the system. It can be done only by the cooperation of many convinced, energetic people – people who are agreed as to the means they must use. We have no great number of choices as to the means. The meaning and goal of passive resistance is to topple National Socialism, and in this struggle we must not recoil from our course, any action, whatever its nature. A victory of fascist Germany in this war would have immeasurable, frightful consequences.” The White Rose group believed that the young people of Germany had the potential to overthrow Adolf Hitler (see Alois Hitler)

and the Nazi government. In one leaflet, Fellow Fighters in the Resistance, they wrote: “The name of Germany is dishonoured for all time if German youth does not finally rise, take revenge, smash its tormentors. Students! The German people look to us.” The White Rose group also began painting anti-Nazi slogans on the sides of houses. This included “Down With Hitler”, “Hitler Mass Murderer” and “Freedom”. They also painted crossed-out swastikas. Members also began leaving piles of leaflets in public places. On 18th February, Hans Scholl and Sophie Scholl 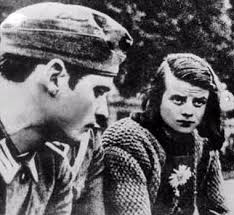 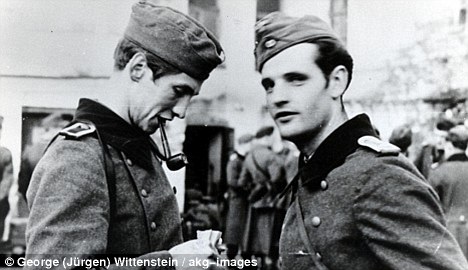 began distributing the sixth leaflet produced by the White Rose group. Jakob Schmidt, a member of the Nazi Party, saw them at the University of Munich, throwing leaflets from a window of the third floor into the courtyard below. He immediately told the Gestapo and they were both arrested. They were searched and the police found a handwritten draft of another leaflet. This they matched to a letter in Scholl’s flat that had been signed by Probst.

The three members of the White Rose group appeared before the People’s Court judge, Roland Freisler

, on 20th February. The outcome of the trial was that all three were guilty of treason and condemned to death. Lawfully, there was a ninety day waiting period before the death sentence could be carried out, enough time to appeal the decision, but the rules were not followed. Asking for clemency during interrogation, he also requested a trial for the sake of his wife and three children, who were aged three years, two years and four weeks old. His wife, Herta Probst,

was sick with child bed fever at the time. Found guilty of sedition he was allowed a visit from a Catholic Priest. Christoph requested baptism into the Catholic faith; he was probably influenced by the devoutness of his friend, Willi Graf. After Christoph embraced the Catholic faith, they were executed by guillotine a few hours later. 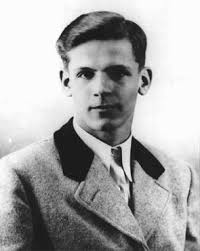 Christoph Probst age 23, is buried on the cemetery Perlacher Forst in Munich, close to the Scholls. 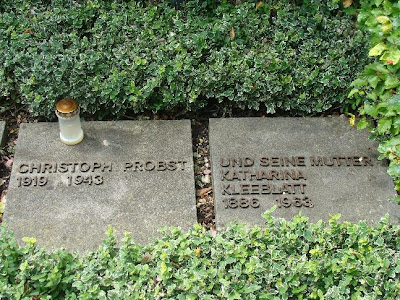