Appointed Mayor of the city of Aachen by Allied forces in October 1944. He was assassinated by a group of the Wehrwolf organization.

received a law degree from Cologne University, and worked as a lawyer until World War II. Oppenhoff was an expert on Nazi law, had been legal representative for the Bishop of Aachen

, and had defended some cases for Jewish companies. Knowing that the Gestapo was interested in him, he had taken refuge in Eupen, across the border in Belgium, in September 1944, taking his wife and three daughters with him. Van der Velden died age 62 on 19-05-1954.

Following the occupation of Aachen after the Battle of Aachen, in October 1944, Allied officials wanted to appoint a non-Nazi to take over administration of the city. Assisted by the Bishop of Aachen, officials managed to make contact with a group of local business people, one of whom was willing to become the first German mayor under American rule. This was Franz Oppenhoff, who was then 42 years old.

When Oppenhoff was sworn into office on 31-10-1944 no press photos were permitted and his name was not divulged, the reason being that he still had relatives in Nazi Germany who might be liable to reprisals from the Nazi regime  Also, earlier in October the SS newspaper, Das Schwarze Korps 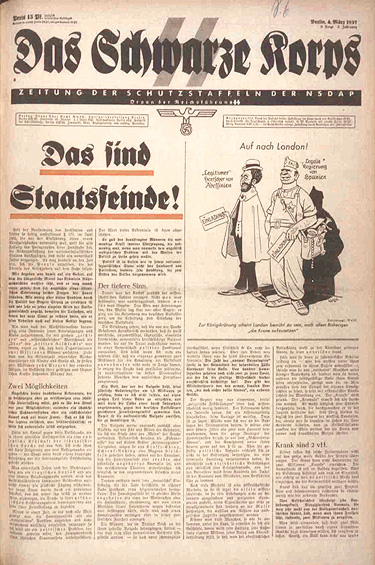 , had written that there would be no German administration under the occupation because any official who collaborated with the enemy could count on being dead within a month.

Oppenhoff was considered a traitor and a collaborationist by the Nazi regime, and his assassination, codenamed Unternehmen Karneval (“Operation Carnival”), was ordered by Heinrich Himmler,

, and carried out by an assassination unit composed of four SS men and two members of the Hitler Youth

. Shortly before the war ended, Prützmann was captured by the Allies. While in their custody, he ended his own life. Whether his suicide happened in Lüneburg, or as another account has it, at an interrogation camp at Camp 020 Interrogation Centre at Fort Diest in Belgium is not quite clear, but it seems certain that the date of his death was 21-05-1945, age 43..

, 23-year-old, a Hauptgruppenführerin in the BDM (League of German Girls)

was supposed to provide supplies but turned out to play an important part in the operation. Wenzel also picked a Werwolf

trainee from Hülchrath to accompany them, 16-year-old Erich Morgenschweiss. Two former members of the Border Patrol (Karl-Heinz Hennemann and Georg Heidorn) completed the team, to act as guides in the area around Aachen.

The unit parachuted from a captured B-17 bomber into a Belgian forest on 20-03-1945. They killed a Belgian border guard at the frontier, then moved on to set up camp near the target. Hirsch became separated from the rest and made her own way to Aachen, where she contacted a friend in the BDM and discovered Oppenhoff’s whereabouts.

The Belgium border guard was the 21 years old Jozef Salve.

The rest of the unit arrived in Aachen on March 25. Wenzel, Leitgeb and one other confronted Oppenhoff on his own doorstep after he had been fetched from a party at his neighbours’ house in the Eupener Strasse 251. They pretended to be German pilots who were looking for the German lines. Oppenhoff tried to persuade them to surrender. Wenzel hesitated, and Leitgeb shouted “Heil Hitler” and shot Oppenhoff in the head. Just before a US patrol arrived to check the telephone line which Wenzel had previously cut, the three assassins scattered. While making their escape from the city, Hirsch activated a landmine which injured her and killed Leitgeb.

Following the war, the surviving members of the assassination squad, with the exception of Wenzel, were tracked down and arrested. At their trial in Aachen in October 1949, all were found guilty and sentenced to between one and four years in prison, and Ilse Hirsch plead guilty in the involvement of the attack on Oppenhoff, was  acquitted, founded a family in 1972 in Aachen and got two children, living close to the crime spot..

A monument was erected for Franz Oppenhoff in Aachen.

The plaque at the monument is part of the project “Wege Gegen Das Vergessen” (Wegen against forgetting).

Franz Oppenhoff is buried with his wife Irmgard, born Nimax, who died age 92 in 2001, on the Ostfriedhof of Aachen.

was a victim of the same group, member of the resistance belonging to the Dutch Home Forces.

The motto of the Werewolf organization

was: Anyone who does not participate is against us. In 1947 the Kaiserallee in Aachen was renamed Oppenhoff-Allee. In October 1949 the Werewolf trial took place: In addition to members of the commando, direct backers were also charged. Initially, prison terms of between one and four years were imposed, and two defendants were acquitted. In two follow-up proceedings, the prison sentences are lessened and finally waived entirely (according to the Law on Exemption from Punishment of 1954) – due to a lack of orders.