the son of Alexander James Gibson and his wife Leonora (“Nora”) Mary Gibson. At the time of Gibson’s birth, his father was an officer in the Imperial Indian Forestry Service,

becoming the Chief Conservator of Forests for the Simla Hill States in 1922. In 1924, when he was six, his parents separated. His mother was granted custody of Gibson, his elder brother Alexander (“Alick”) and sister Joan, and decided to return to England. He joined the RAF

in 1936, becoming an Acting Pilot Officer with effect from and with seniority of 31-01-1937 and a Pilot Officer on 16-11-1937, learning to fly at No.3 Flying Training School at RAF Scopwick in Lincolnshire. By the outbreak of World War II he was a bomber pilot with 83rd Squadron

, flying the Handley Page Hampden. In July 1940 he won the Distinguished Flying Cross

. On the night of 24/25 August 1940 his gunners claimed the probable destruction of a Dornier Do 17 over Lorient docks. After completing his first tour of duty of 27 operational sorties, Gibson and Les “Leslie” Gordon Knight

volunteered for RAF Fighter Command, avoiding the normal six-month rest from operations at a flying training establishment. In 1943 he was selected to command the new 617 Squadron

asked to destroy dams in the Ruhr area. To accomplish this they were provided with the bouncing bomb designed and developed by Barnes Wallis.

The bombs had to be dropped from 60 feet (18 m) from a predefined distance to skip across the water into the dam face and then roll down it to explode at predefined depth.

To stand any chance of success Operation Chastise had to be flown at night. On the night of 16-05-1943 19 Lancasters

carried one bomb each. It took five attempts to breach the Moehne Dam. Gibson then led the three remaining Lancasters to attack and breach the Eder Dam. Two other dams were attacked but not breached. 11 of the bombers survived the mission, 53 crew members died in the raid. The devastation caused by the raids was extensive but the Germans managed to rebuild and recover much more quickly than was expected. After the Dams raid, Gibson was awarded the Victoria Cross

in recognition not just of the raid, but his leadership and valor demonstrated as master bomber on many previous sorties. He received the award of king George VI.

on 23-11-1940 at Penarth in Wales. They had met each other in December 1939 at Coventry. Evelyn was born on 27-11-1911 in Penarth. It was not a happy marriage. They both had casual relationships outside their marriage. They last met in august 1944 and he seems to have been ready to discuss a divorce, although she seemed to want to try again when the war had finished.  After Gibson’s death Evelyn moved to South Africa in 1948 to marry a South African businessman. They divorced and she returned to Britain in 1954. She reverted to the surname Gibson. On 03-11-1988 Evelyn Gibson died.

Gibson returned to operational duties in 1944 after pestering Bomber Command and was killed along with his navigator Squadron Leader Jim Warwick, by friendly fire, flying home after 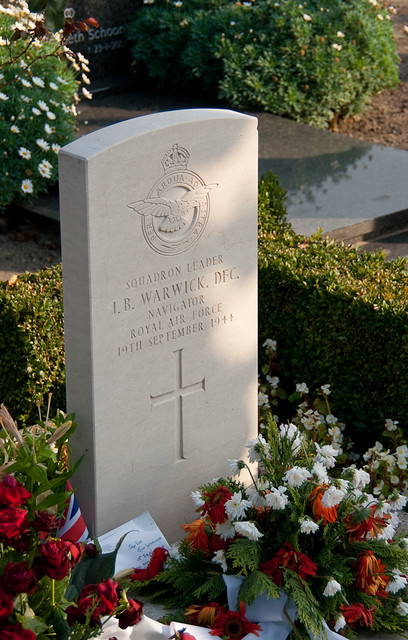 a bombing raid on Rheydt, in this town Josef Goebbels

was born, nowadays a borough of Mönchengladbach, when his Havilland Mosquito XX, KB267,

crashed near Steenbergen, the Netherlands, on 19-09-1944 (see About). As Gibson did not have a regular navigator, one had to be found to fly with him. The original choice was sick, so Squadron Leader Jim Warwick DFC was selected.  A 67 years later it is known for sure that Gibson and his navigator’s Mosquito, was shot down by friendly fire from a Lancaster from No 61 Esquadron

in the dark, at 23.19 hours, on their way back to England, thought to see an attacking Ju 88 and he opened fire. Probable he recognized a Junker 88 with “the look a like” of a Havilland Mosquito and reacted immediately. An eye-witness account detailed how Gibson’s aircraft circled Steenbergen in the Netherlands and then heard its engines ‘splutter and stop’. Sergeant McCormack died in 1992 and according to his wife Eunice her husband, the former mayor of Holyhead, Wales, always was consumed by feelings of quilt. He left a statement about the 19 September 1944 event during that night, “Probable a Ju 88”. The town of Steenbergen has since honoured Gibson and Warwick by naming a street after each of them (Gibson street and Warwick street). Gibson, age 26, is buried on the local cemetery of Steenbergen, next to his navigator, Jim Warwick.
Guy Gibson’s dog the Labrador “Nigger”, the 617 Squadron dog

was run over by a car and killed on the morning of the famed Dambusters raid. He was buried at RAF Scampton.