A captain and British author, scholar and soldier who played a prominent role behind the lines in the Cretan resistance . He kidnapped the German General Karl Heinrich Kreipe.

In the churchyard Saint Peter, at Dumbleton, next to Joan his wife.. 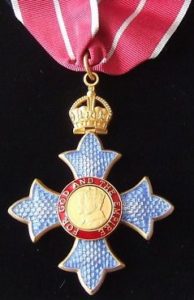 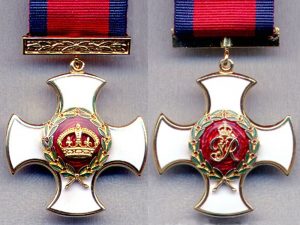 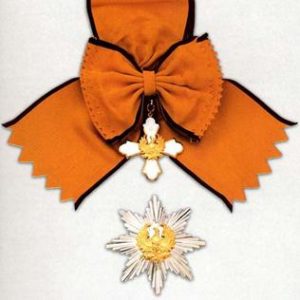 a distinguished geologist, and Muriel Aeyleen, daughter of Charles Taafe Ambler.  Shortly after his birth, his mother and sister left to join his father in India, leaving the infant Patrick in England with a family in Northamptonshire. He did not meet his family in person until he was four years old. As a child, Leigh Fermor had problems with academic structure and limitations. As a result, he was sent to a school for “difficult children”. He was later expelled from The King’s School, Canterbury,

when he was caught holding hands with a greengrocer’s daughter.

His last report from The King’s School noted that the young Leigh Fermor was “a dangerous mixture of sophistication and recklessness.” He continued learning by reading texts on Greek, Latin, Shakespeare and History, with the intention of entering the Royal Military College Sandhurst. Gradually he changed his mind, deciding to become an author instead, and in the summer of 1933 relocated to Shepherd Market in London

, living with a few friends. Soon, faced with the challenges of an author’s life in London and rapidly draining finances, he set upon leaving for Europe.

At the age of 18, Leigh Fermor decided to walk the length of Europe, from the Hook of Holland to Constantinople. He set off on 08-12-1933, less than a year after Hitler had come to power in Germany, with a few clothes, several letters of introduction, the Oxford Book of English Verse and a volume of Horace’s Odes. He slept in barns and shepherds’ huts, but also was invited by landed gentry and aristocracy into the country houses of Central Europe. He experienced hospitality in many monasteries along the way. Two of his later travel books, A Time of Gifts

were about this journey. A book on the final part of his journey was unfinished at the time of Leigh Fermor’s death, but was published as The  Broken Road: Travels from Bulgaria to Mount Athos in September 2013 by John Murray. The book draws on Leigh Fermor’s diary at the time and on an early draft he wrote in the 1960s.

Leigh Fermor arrived in Constantinople on 01-01-1935, then continued to travel around Greece. In March, he was involved in the campaign of royalist forces in Macedonia against an attempted Republican revolt. In Athens, he met Balasha Cantacuzène

, a Romanian Phanariote noblewoman, with whom he fell in love. They shared an old watermill outside the city looking out towards Poros, where she painted and he wrote. They moved on to Baleni, Galati, the Cantacuzene house in Moldavia, where they were living at the outbreak of World War II.

, who died age 65 on 27-02-1986 and later joined the Irish Guards. Due to his knowledge of  modern Greek, he was commissioned in the General List

in August 1940 and became a liaison officer in Albania. He fought in Crete and mainland Greece. During the German occupation, he returned to Crete three times, once by parachute. He was one of a small number of Special Operations Executive (SOE)

officers posted to organise the island’s resistance to the occupation. Disguised as a shepherd and nicknamed Michalis or Filedem, he lived for over two years in the mountains. With Captain Bill Stanley Moss

as his second in command, Leigh Fermor led the party that in 1944 captured and evacuated the German commander, General Heinrich Kreipe.

There is a memorial commemorating Kreipe’s abduction near Archanes in Crete.

Patrick Leigh Fermor with Billy Moss in Crete, April 1944, wearing German uniforms.  Even after many years together, Leigh Leigh Fermor was married in 1968 to the honourable Joan Eilsabeth Rayner, born Eyres Monsell

and daughter of Bolton Eyres-Monsell. She accompanied him on many of his travels until her death, after a fall, in Karadamyli in June 2003, aged 91. They had no children. They lived part of the year in their house in an olive grove near Kardamyli in the Mani Peninsula, southern Peloponnese, and part of the year in Gloucestershire.

General Kreipe met his kidnappers one more time in 1970 in a Greek TV show.

Leigh Fermor was noted for his strong physical constitution, even though he smoked 80 to 100 cigarettes a day. Although in his last years he suffered from tunnel vision and wore hearing aids, he remained physically fit up to his death and dined at table on the last evening of his life.

For the last few months of his life Leigh Fermor suffered from a cancerous tumor, and in early June 2011 he underwent a tracheotomy in Greece. As death was close, according to local Greek friends, he expressed a wish to visit England to say good-bye to his friends, and then return to die in Kardamyli, though it is also stated that he actually wished to die in England and be buried next to his wife.

Leigh Fermor died in England, aged 96, on 10-06-2011, the day after his return. His funeral took place at St Peter’s Church, Dumbleton, Gloucestershire on 16-06-2011. A Guard of Honour was provided by serving and former members of the intelligence Corps, and a bugler from the Irish Guards sounded the Last Post and reveille. Leigh Fermor is buried next to his wife Joan Eilsabeth Rayner, born Eyres Monsell,  in the churchyard at Saint Peter, Dumbleton.