Jack grew up in Weston-Super-Mare. After leaving school, where he was Captain of the school and the swimming team, he was apprenticed to a Swiss Engineering group. In 1940 he decided to volunteer for the army instead of waiting for conscription. Jack joined The Life Guards

. With the 2nd Household Cavalry Regiment he crossed to Normandy on D-Day plus 6,

by now the commander of a leading scout car, the most dangerous job in the Regiment. Together with his driver Ted Bateman, Ted was killed in Nijmegen, Jack was to be in the forefront of events from then to the War’s end. The dash for the three bridges Faith, Hope & Charity and the 93 mile advance to Brussels where “We out Panzered the Panzers” as Jack put it. By-passing Brussels the Regiment was tasked to seize and hold bridges over the River Dyle in Louvain until such time as the rest of the Army caught up with them. Jack and Ted Bateman led the way into the town’s streets followed by Lieutenant Hanbury’s Daimler armoured car, after they had been warned by Belgian civilians “It is suicide, the town is full of Germans”. No matter, down the narrow streets towards

the bridge they went under heavy small arms fire from all sides and above. So with the scout car returning fire and Lieutenant Hanbury directing the Daimler’s guns to shoot over their heads they eventually reached the bridge.

Jack found himself in the middle of the bridge before he recognised where he was. They halted after shooting a German who was connecting wires to a detonator box. A German car came racing down the street in front of them and despite being under heavy fire it reached the far side of the bridge. The German driver got out and ran to the detonator box and dived for cover. A Belgian civilian ran from a door way and dived onto the German. They struggled and as Jack recalled “He was losing the fight. I shot a burst at the pair of them, I thought them both dead, sad but necessary”. There were in fact a couple of 500 pound bombs slung under the bridge waiting to be ignited. CoH (later Major) Thompson, after making his epic left hook over the partly destroyed second bridge, now joined them  bringing a band of Belgian resistance fighters with him. Together they drove the remaining Germans from the town. During this battle, lasting over an hour, the Troop used up most of its ammunition and as Lieutenant Hanbury said “We were just about down to our pistols”. For their actions in Louvain, 3rd Troop received recognition in a Military Cross for Lieutenant Hanbury, a DCM for Co H Thompson and a Military Medal for Jack. Fifty years after these events Jack Brook was awarded a gold medal by the City of Louvain and was met by the brave Belgian he shot at the bridge.  One of Jack’s bullets had passed through his wrist to kill the German. Their next task was to see if there were any intact bridges over the Albert Canal (see J.O.E. Vandeleur). 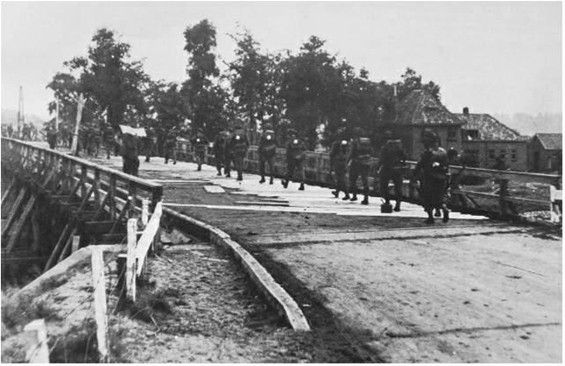 was the commander of the Irish Guards

who took the bridge. During the Second World War the Irish Guards lost a total of 59 officers killed, 114 officer wounded, 675 other ranks killed with 1.464 other ranks wounded. This brought Jack to Tessenderlo, Belgium. On the 11th September Jack and Ted were loaned to Lieutenant Andrew Buchanan-Jardine

to join him in his reconnaissance to cross the border into The Netherlands towards Valkenswaard. Jack and Ted led the way and became the first British soldiers to enter Holland, if only on a temporary basis. On special orders from Division two Daimler Scout Cars of the 2nd Household Cavalry

under command of General Brian Horrocks

, tanks. Horrocks “Jorrocks” died on 04-01-1985, at the age of 89. Crossing the enemy lines shortly after noon two Daimlers drove on for some five miles, questioning several Dutch civilians on the way, until they reached a roadside café, ‘Rustoord’

, about a mile short of the bridge where they were surrounded by a large group of overjoyed Dutchmen who thought liberation had come. While Lieutenant Buchanan-Jardine tried to calm the civilians the commander of the other scout car, Lance Corporal-of-Horse Jack Brook, carried on the race to the bridge. It was intact, for he saw a German Mark IV

parked right on it. Returning to the cafe they sent back a radio report. This done, the patrol returned the way it had come racing through the German lines at full speed and regaining friendly territory with everything on their cars punctured and broken by German bullets. A group of Dutch civilians were so curious that they went to the border on there bicycles to meet the English soldiers. They were captured by mad Dutch volunteers SS men and when they were ordered to leave for home, two were killed by back shots. The civilians of Borkel and Schaft nearby were the father of eight, Johannes Maas and a father of eleven children, Christiaan Tegenbosch. A third, Chris Aarts was shot in the back and the bullet came out his through his belly cutting of three fingers of his right hand with which he was still holding his bike. Severely wounded he came in hospital and survived.

After the war he lived with his wife Rita and children in Knowle, Solihull, where Jack at the old age of 81, on 12-12-2001, died of prostate cancer, his grave is on the church-yard in Knowle.