East Prussia, joined the Army on 31-07-1916, as a Fahnenjunker in the Kaiserlichen Armee, with the I. Ersatz-Batailon des Infanterie-Regiments 176

. He followed a training as Machine Gunner with the Fortress-MG-Kompanie in Thorn and during World War I, he was all the time in the fields with the 176th Westpreußisches Infanterie-Regiment. In battle on the Western Front, in Flandern,

. He was allowed to stay in the new Reichswehr and promoted to Major in the General Staff. At the beginning of World War II, he is assigned to the Staff of Transport Department of the OKH

and active on the Western front. As Oberst he gets the command of the LIII Armeekorps and is awarded with the German Cross, for his efforts on the Russian front. Mid February 1943 he is released of his post and lands in the Führer Reserve (see Adolf Hitler) (did you know). On 10-03-1943 he is given the command of the 6th Army under General Egon von Neindorff

He is awarded with the Iron Cross for his excellent leading in the retreating battles along the river Rhine by commanding General des LXXX. Armee-Korps General der Infanterie, Franz Beyer

. After the command is of the 47th Volksgrenadier Regiment, he took over the “Korps Bork” for the defends of Salzburg, but the town commander wanted Salzburg to be a free and open city, no destructions. Bork was captured by the Allies and in prison until  01-05-1948. 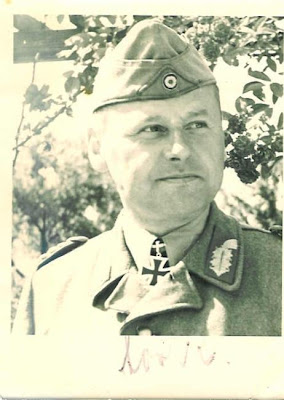 the Flyer Ace and his crew who crashed 07-10-1944. Generalleutnant Bork is buried with his wife Else, born von Dobrowolski, who died age 82 in 1978, on the small cemetery of Hollern in the same family grave as Generalmajor and Commander of the 1st  Fallschirm-Panzergrenadier Division 2 “Hermann Goering”