germanyGeneralLuftwaffe
Andrea, Alexander, born 27-04-1888 in Kösling, entered the Army Service, at the age of 19, on 18-05-1907. During World War I, he served with the 561th Field Artillery Brigade, in the Staffs of the 2nd Army, the 25th Infantry Division

, the 9th Landwehr Division and the XVI Army Corps. He received both the Iron Crosses

. After the end of World War I, he remained in the Reichswehr, from which he retired in 1920. He then moved to the security police, where he stayed until 1935 when he re-entered the army. In August 1936, he joined the than newly established Luftwaffe

After the German invasion of Crete in Mai 1941, (see Bruno Brauer)

he became commander of the Fortress Crete until 30-08-1942, succeeded by Generalleutnant der Infanterie, “The Butcher of Crete”, Friedrich Müller,

who would be executed by the Grecians, like Bräuer too.  Under his command, thousands of civilian residents of Crete were tortured or executed. During 1942, SOE agent Xan Fielding

was considering a plan to capture Andrae. Major Alexander Wallace Fielding DSO (born 26-11-1918 and died 19-08-1991, age 72) was a British author, translator, journalist and traveller, who served as a Special Operations Executive agent in Crete, France and the Far East during World War II. This plan never materialized, since in fall 1942, Andrae was assigned to the Reich Air Ministry, leaving the command of Crete to paratrooper General Bruno Bräuer. However, the idea of capturing a German General evolved into the abduction of Generalmajor Karl Heinrich Kreipe.

Andrae retired from service in May 1943, to be called again for active duty as an artillery General in April 1945 with the 4th Panzer Army. Andrea retired from the Luftwaffe Service, on 31-05-1943, age 65 and took over the command of the 4th Panzer Corps

from Waffen SS Obergruppenführer, Hermann Hoth, who’s gravestone recently is removed, as Bill Sanstrom from Arizona found out after a visit to the cemetery.

Germany lost more then 7.000.000 of their population during World War II, from which 4.500.000 military deaths. Russia lost 8.700.000 soldiers and our Netherlands a total of 301.000, soldiers, resistance, population and Jewish people. After the surrender of Germany in May 1945, Andrae was captured by the British and then extradited to Greece to be tried for war crimes he was responsible for while in Crete. In 1947, he was condemned to four life sentences, but after spending four years in the Aweroff prison in Athen. he was released on 24-12-1951.

Later, Andrae was one of the founders of the German Bundeswehr and stayed in prison until 24-12-1951. He retired until his death, on 03-04-1970, at the very old age of 90, in the city of Wiesbaden. Wiesbaden, was a very popular place for Generals.Alexander Andrea, is buried with his wife Charlotte, born Walter, who died age 68, on 15-02-1968, on the Südfriedhof in Wiesbaden between many other General der Infanterie,Commandeur der 76th Infanterie Division 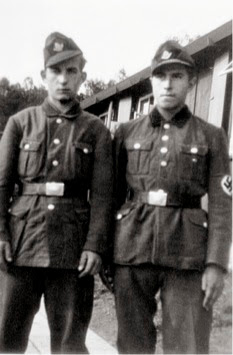 was an assistant tank gunner with the division after having been conscripted into the Waffen-SS at the age of 17 in November 1944. He was wounded in action on 25-04-1945 and captured in a hospital. His military service became the subject of debate in 2006, after he disclosed in an interview and a book that he had been conscripted into the Waffen-SS