began the war as a cavalry officer with the 4th Dragoon Regiment. In October 1914, while stationed at Attigny, he was awarded the Iron Cross 2nd Class

for valour. The following month, his regiment was transferred to the Eastern Front. Richthofen joined the German Army Air Service in late 1915. He served from January 1916 as an observer with Kasta 23, front flyers squadron, and saw action during the Battle of Verdun. He won the Iron Cross 1st Class in December and then began training as a pilot. His first posting as a pilot was to his brother’s Jasta 11 on 06-03-1917. His first victory claim followed on 28 March for an FE 2b of No. 25 Squadron, Royal Flying Corps, motto Striking I defend”

. Taking part in the period of German dominance called Bloody April by the British, Lothar had won 15 more victories by the beginning of May. When his brother went on leave, Lothar von Richthofen assumed command of the squadron. The Red Baron considered his brother’s combat style to be reckless, describing him as a “shooter” rather than a “hunter”, and worried about his safety. During the first week of May 1917, Lothar von Richthofen scored three more victories. On the evening of 7 May near Douai, he led a flight of 5 Albatros D. III’s from Jasta 11 that encountered 11 S. E.5s from the “elite” No. 56 Squadron RFC

, including the top English ace of the time, Captain Albert Ball,

as well as a SPAD S.VII from No. 19 Squadron, and a Sopwith Triplane of No 8, Naval, Squadron. Albert Ball, at the time of his death on 07-05-1917, age 20 in a crash, was, with forty-four victories, the United Kingdom’s leading flying ace. In a running battle in deteriorating visibility in the middle of a thunderstorm over Bourlon Wood, both sides became scattered. Richthofen engaged in single combat with the British Triplane. At about the same time, Ball was seen by fellow 56 Squadron pilot Cyril Crowe

chasing a red Albatros into a thundercloud. Cyril Crowe died old age 80on 31-05-1974 in Swindon. Ball lost control of his plane and crashed fatally. Though forced to land his damaged aircraft, Richthofen escaped injury

. The British Sopwith Triplane involved in the action returned to base undamaged. Richthofen posted a claim for shooting down the Sopwith Triplane. However, the propaganda value of Ball’s death under the guns of a German pilot was obvious, and the German High Command awarded a victory over Ball to Lothar. The falsity of the award was readily apparent. The idea that an experienced pilot such as Richthofen would confuse a triplane with a biplane was ludicrous. Leutnant Hailer, a German pilot on the ground who witnessed the crash and was the first German at the crash scene saw no battle damage to Ball’s plane. The doctor who autopsied Ball reported massive injuries to Ball from the crash, but no bullet wounds. Nevertheless, the official line was that Lothar von Richthofen shot down Albert Ball. Later research suggests that Ball became disoriented by vertigo, accidentally entering an inverted dive which choked his plane’s carburetor and stopped the engine, causing him to crash. Richthofen raised his total to 24 by 13 May, when, after shooting down a BE.2, he was wounded in the hip by anti-aircraft fire and crash-landed; his injuries kept him out of combat for five months. On 14 May he was awarded the Pour le Mérite, and he resumed command of Jasta 11 in September 1917. In early 1918 he suffered a severe ear infection and was hospitalised in Berlin. Returning to his unit in February, he claimed 3 Bristol Fighter F2.Bs on 11 and 12 March, before he was again forced down on 13 March by a Sopwith Camel flown by Captain Augustus Orlebar 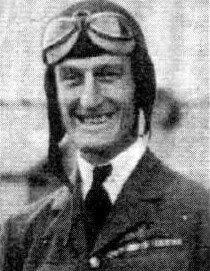 of No. 73 Squadron. Orlebar later an Air Vice Marshal died age 46 on 04-08-1943, he fell ill, and died in hospital. Nursing his crippled Fokker Dr1 Triplane into a landing, Richthofen clipped a high-tension wire and crashed heavily, suffering serious head injuries. He was still recovering when he learned of his brother’s death.

Lothar returned to service with Jasta 11 in July 1918. He scored his final victory on 12-08-1918, flying a Fokker D.VII. The next day he was again wounded in action against Sopwith Camels, probably by Captain Field E. Kindley

of the 148th Aero Squadron USAS