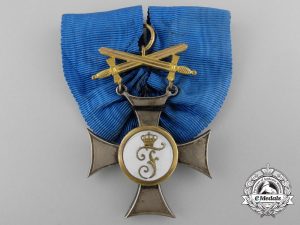 the son of the merchant Theodor Adam and his wife Margarethe, born Engerer, attended the humanistic grammar school in Amberg and Ansbach until graduating from high school in 1897. Adam joined the German Army in 1897, serving in Bavarian telegraph and Communication units, before being detached to the Bavarian War Academy in 1907. At the end of 1914 he became a General Staff Officer on the Staff of the Army High command. At the end of the World War I and awarded with several decorations,

Adam served in various posts within the 100.000 men Reichswehr, with 8 Infantry and two calvary, from posts such as a liaison officer to the Bavarian Military Ministry and being an infantry battalion commander, in the 20th Infantry Regiment

. By Adolf Hitler’s (did you know) rise to power, Adam was Chief of the Troop Office and later was commanding a division. Adam retired on the 31-12-1938, but he was recalled for service from 26-08-1939. At the end of the World War II he came into trouble again for his critical attitude about the war events, after he told his pessimism about Hitler and the development of the war events during a play of cards with a friendly forester from Grainau and muscian, Richard Strauss in their local cafe, in Garmisch Partenkirchen\. 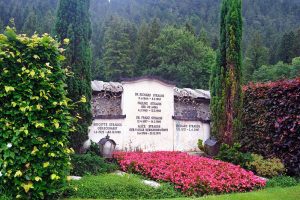 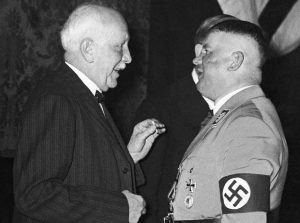 Strauss the famous German composer and conductor, died old age 85, on 08-09-1949, in Garmisch. Their criticizing talks about the Führer and the war loss was reported to the Gestapo

by the mayor of Garmisch, the first Nazi one. Adam escaped of pursuit by the help of SS Reichsleiter, Heinrich Himmler

an old friend from before World War II. The letter Adam wrote Himmler, is in the History Institute of Münich. In 1933 he already had criticized the then Reichskriegsminister, Werner von Blomberg, 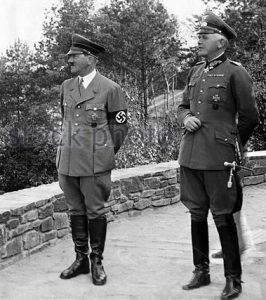 a reason why he lost his post as commander of the VII Army Corps to Generalfeldmarschall, Walther von Reichenau

In the expansion of the Reichswehr, he was appointed commander in military district VII on 01-10-1934. Even as a military commander, he continued to oppose the Nazi regime. He described leaving the League of Nations as “the first step into ruin”. On April 01-04-1935, he was promoted to General of the infantry. When exposed, he was appointed Commanding General of the 7th Army Corps. In the fall of 1935, Adam was due to be released from military service. Von Blomberg argued that he did not believe in National Socialism and therefore had to go. Field marshal Werner von Blomberg , however, changed his mind and Wilhelm Adam was appointed commander of the Wehrmacht Academy on 01-10-1935. On 01-03-1938, on Fieldmarshal Wilhelm Keitel‘s

suggestion, he was appointed Commander-in-Chief of Group Command 2. On a tour of Hitler’s visit to the west wall on 27-08-1938, Adam spoke openly about the low combat value and the low level of expansion of the west wall. Hitler then broke off the sightseeing trip furiously. In early autumn 1938, Adam agreed to take part in a conspiracy against Adolf Hitler. After this became illusory after the Munich Agreement, Adam asked for his farewell.Fieldmarshal Walther von Brauchitsch 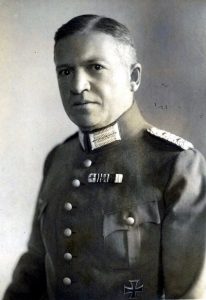 Wilhelm Adam, with his wife Isabella Adams, born Buchner, who died age 85 in 1970, are buried on the Stadtfriedhof in Partenkirchen. 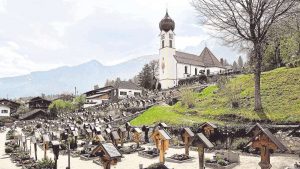 On 16-08-1943, the village of Kommeno was attacked at the order of Oberstleutnant Josef Salminger

, the commander of Gebirgs Jäger Regiment 98, a total of 317 civilians were killed. Elements from the division took part in the murder of thousands of Italians from the 33 Acqui Infantry Division

under command of General Antonio Gandin,

in September 1943 on the Greek island of Cefalonia following the Italian surrender. 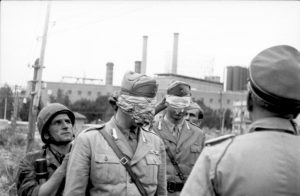 in Albania after the Italian surrender. Following the killing of Oberstleutnant Josef Salminger, age 40 on 01-10-1943, by Greek partisans, the commander of XXXII Gebirgs-Armeekorps, General der Gebirgstruppe Hubert Lanz

issued an order of the day on 01-10-1943 calling for a “ruthless retaliatory action” in a 20 km area around the place where Salminger had been attacked. In the village of Linqiades 87 civilians were killed, a total of at least 200 civilians died. Hubert Lanz died old age 86, on 15-08-1982 in Munich. Also buried in Partenkirchen, Walter von Trettner von Grabenhofen, Generalleutnant der Infanterie, Stadt Commander of Dresden, Robert Schlüter, composer, Richard Strauss, Korvetten Kapitän, Carl Daehncke and Wannsee Conference participant, Eric Neumann. On the Garmich Stadtfriedhof are the graves of the WWII General der Artillerie, Kommandeur 16th Armeekorps, Christian Hansen, 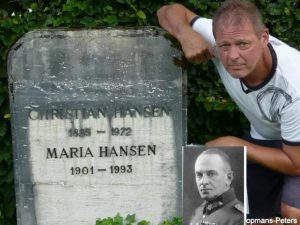 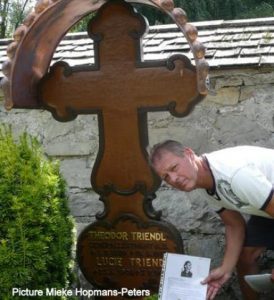 Generalleutnant der Panzertruppe, Kommandant Festung Pillau, Eduard Hauser and General der Flieger, Kommandeur Luftregio Belgium-France, Wilhelm Wimmer. Part of his biography and his gravepicture were kindly sent to me by his grandson, Werner Adam, also living in the beautiful town of Garmisch Partenkirchen. 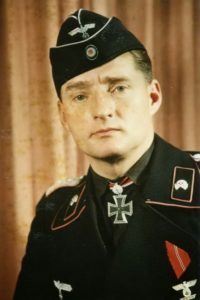 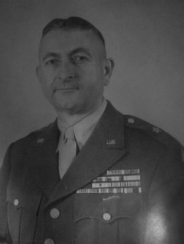