On June 8, 1944, two days after the Allied landing, the German Army Commander-in-Chief for the West, Field Marshal Gerd von Rundstedt,

issued orders to “crush” the resistance “with swift and ruthless initiative,” and express the “expectation that the major operation against the gangs [i.e., partisans] in Southern France will be carried out with the greatest severity and without leniency.” General Karl-Heinrich von Stülpnagel,

the Military Commander in France, ordered the redeployment of a number of units stationed throughout France to reinforce the Normandy front and to crush partisan activity behind the German lines. Among the units redeployed to Normandy was the 2nd Waffen-SS Panzer Division Das Reich

which had arrived as a reserve unit in the southern French town of Montauban in January 1944.

Das Reich had seen two years of combat duty, including numerous anti-partisan actions on the Eastern Front, before its transfer to France. Its commander, SS-Brigadeführer Heinz Bernhard Lammerding 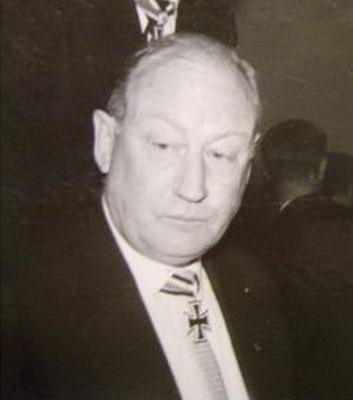 , had served from July 1943 to January 1944 as the chief of staff for SS Obergruppenführer Erich von dem Bach-Zelewski,

had appointed to command and coordinate anti-partisan operations behind German lines in the occupied Soviet Union. In this capacity, Lammerding had ordered several retaliation actions against Soviet civilians for real or perceived partisan activities or “sympathies.” Such operations involved the murder of tens of thousands of civilians, many of whom had had nothing to do with the partisans, and the torching of dozens of villages. Heinz Lammerding died of cancer age 65 on 13-01-1971 in Bad Tölz.

As the 2nd SS Division redeployed to Normandy, French resistance fighters harassed it. On June 9, 1944, Lammerding issued orders for the division to “cleanse” the area around Clermont-Ferrand of partisans. That same day, members of the division had displayed what “cleansing” of partisans would mean. In retaliation for an attack, soldiers of Das Reich hanged 99 male inhabitants of the village Tulle, near Limoges.

The next day, June 10, 1944, soldiers of the 3rd Company, 1st Battalion, 4th SS-Panzergrenadier Regiment (motorized infantry) Der Führer, a subordinate unit of the 2nd SS Panzer Division since April 1944, advanced to the village of Oradour-sur-Glane. Led by the commander of the 1st Battalion, SS Sturmbannführer Adolf Diekmann,

At that point in time, the village population had almost doubled to about 650 people, swelled by refugees, including some Jewish refugees, from other parts of France.

Massacre and destruction of Oradour-sur-Glane
The SS soldiers rounded up the entire population and concentrated them on the market square. Thereafter they separated the villagers by gender. Members of the 1st and 2nd platoons took the 197 men to several barns on the edge of town and locked them in. The 3rd platoon locked up 240 women and 205 children in the village church. Then the SS men set fire to the barns and threw grenades through the windows of the church, shooting those who sought to escape the flames.

After 642 inhabitants, including seven Jewish refugees, were dead, the company looted the empty dwellings and then burned the village to the ground. At about 8:00 p.m. on the evening of June 10, the SS men withdrew from the smoking ruins. Only seven villagers survived the massacre: six men and a woman, all of them more or less severely injured. About fifteen other inhabitants of the village were able to escape the Germans before the massacre started or evade the roundup by hiding. Robert Hébras

The destroyed village of Oradour sur Glane is saved as a monument.

a then 20-year-old American B-17 navigator as a Navigator with the 389th Bomb Group,

shot down over Avord, France in late April 1944, witnessed the aftermath of the massacre. After being hidden by the French Resistance, Murphy was flown to England on 6 August, and in debriefing filled in a questionnaire on 7 August and made several drafts of a formal report. The version finally submitted on 15 August has a handwritten addendum:

About 3 weeks ago, I saw a town within 4 hours bicycle ride up the Gerbeau farm [of Resistance leader Camille Gerbeau] where some 500 men, women, and children had been murdered by the Germans. I saw one baby who had been crucified.

Murphy’s report was made public in 2011 after a Freedom of Information Act request by his grandson, an attorney in the United States Department of Justice National Security Division. It is the only account to mention crucifying a baby. Shane Harris concludes that the addendum is a true statement by Murphy and that the town, not named in Murphy’s report, is very likely Oradour-sur-Glane.