The Dieppe Raid, also known as the Battle of Dieppe, Operation Rutter and, later, Operation Jubilee, was an Allied attack on the German-occupied port of Dieppe during World War II. The raid took place on the northern coast of France on 19 August 1942. The assault began at 5:00 a.m. and by 10:50 a.m. the Allied commanders were forced to call a retreat. Over 6,000 infantrymen, predominantly Canadian, were supported by the Calgary Regiment of the 1st Canadian Tank Brigade and a strong force of Royal Navy and smaller Royal Air Force landing contingents. It involved 5,000 Canadians, 1,000 British troops, and 50 United States Army Rangers.

Objectives included seizing and holding a major port for a short period, both to prove that it was possible and to gather intelligence. Upon retreat, the Allies also wanted to destroy coastal defences, port structures and all strategic buildings. The raid had the added objectives of boosting morale and demonstrating the firm commitment of the United Kingdom to open a western front in Europe.

Virtually none of these objectives were met. Allied fire support was grossly inadequate and the raiding force was largely trapped on the beach by obstacles and German fire. Less than 10 hours after the first landings, the last Allied troops had all been either killed, evacuated, or left behind to be captured by the Germans. 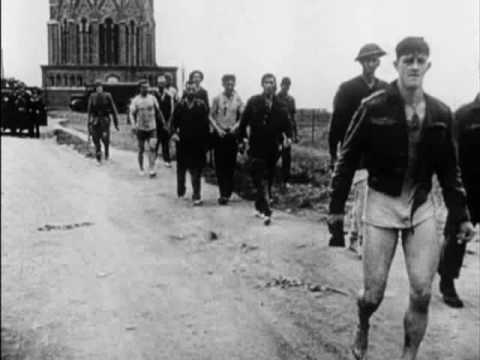 Instead of a demonstration of resolve, the bloody fiasco showed the world that the Allies could not hope to invade France for a long time. Some intelligence successes were achieved, including electronic intelligence.

The Royal Air Force failed to lure the Luftwaffe into open battle, and lost 106 aircraft (at least 32 to flak or accidents), compared to 48 lost by the Luftwaffe. The Royal Navy lost 33 landing craft and one destroyer. The events at Dieppe influenced preparations for the North African “Operation Torch” and  the Normandy landings “Operation Overlord”.

Persecution of homosexuals in Nazi Germany and the Holocaust.