During the war, the treatment of prisoners of war was supposedly governed by the Geneva Convention, a document formulated in 1929 in Switzerland and signed by the major western powers including Britain, Italy, the US and Germany. The armies of the Western Allies were under strict orders to treat Axis prisoners in line with the convention, something which generally occurred. Some abuses, however, such as the shooting and beating of German POWS by US troops, did take place. 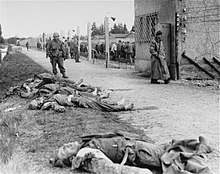 A notorious example is the Dachau Massacre, when the soldiers who liberated the camp shot several SS guards, allegedly as they attempted to surrender.

Germany and Italy generally treated prisoners from France, the US and the British Commonwealth in accordance with the convention. The Germans were obliged to apply this humane treatment to Jewish prisoners of war who wore the British Army’s uniform, thus sparing them the horrific fate meted out to other Jews. Although Allied prisoners of war complained of the scarcity of food within German POW camps

, they were treated comparatively well. For example, ordinary soldiers who were made to work were compensated, and officers were exempt from work requirements. The International Red Cross eased conditions by distributing food packages and providing medical assistance.

Although escape from German camps was almost impossible for Allied POWs, inmates did stage several famous breakouts. The Stalag Luft III camp for Airmen in Silesia (now Żagań in Poland), was the site of two famous escapes by prisoners who used scavenged objects and materials to dig a series of underground tunnels. In October 1942, a group of four prisoners which included the Army Officer (and later author) Patrick Reid made a successful breakout from Colditz Castle.

They slipped out unnoticed through the kitchens into the yard, through the cellar and then finally down to a dry moat and through a park. The group then split into two pairs; all four men managed to reach the safe-haven of Switzerland. Reid was married three times; firstly in 1943 to Jane Cabot. They had three sons and two daughters, and were divorced in 1966. His second marriage in 1977 to Mary Stewart Cunliffe-Lister ended in 1978, with her death. In 1982 he married his third wife, Nicandra Hood, but they separated after a few years. He died at Frenchay Hospital, Bristol,on 22 May 1990, at the age of 79.

Soviet prisoners of war were treated in accordance with their supposed ‘subhuman’ Slavic racial status by the Germans. Hiding behind the (legally invalid) pretext that the Soviet Union had not signed the Geneva Convention, the Germans treated Soviet prisoners with appalling brutality and neglect. Many died as slave labourers or ended up in death camps. Of the 5.7 million Soviet prisoners taken by the Axis powers, 3.3 million died in captivity. This figure, when compared with the 8,348 Western Allied prisoners who died in German POW camps (of a total of 232,000) starkly demonstrates the radically different treatment given to both groups.In late 1944, as the tide of the war turned against Germany, the Nazi authorities began to move thousands of prisoners towards the interior of Germany, away from the advancing Allied armies. Over the winter of 1944/45, thousands of prisoners who were already weak, ill and malnourished were forced to walk miles to railway stations, and then taken in cattle trucks to their new destinations. During these infamous ‘Death Marches’, many were shot or died of exhaustion. 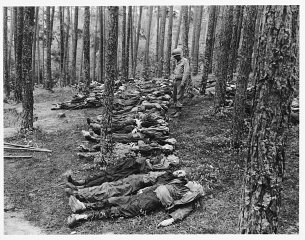 Prisoners of the Soviet Union also faced a grim fate. Thousands of Polish soldiers captured following the Soviet invasion of Poland in September 1939 were executed. More than 20,000 Poles were killed in the Katyn Forest Massacre. Of the almost 100,000 Germans captured following the Battle of Stalingrad, only 5,000 survived the war. Many German captives were sent to labour camps in the depths of Russia, where hunger, exhaustion and freezing conditions killed thousands.