In 1937 as an SS Oberscharführer (Staff Sergeant), he attended the SS Junker school at Brunswick

where he came out in the top 12 on the course. In March 1938 he was promoted to an SS-Sturmfuhrer (Second Lieutenant)

and was posted as a platoon commander to the 1st SS Division Leibstandarte Adolf Hitler Regiment.

and given command of the 9th company of the Leibstandarte, for the Poland Campaign and the Battle of France. Frey here with 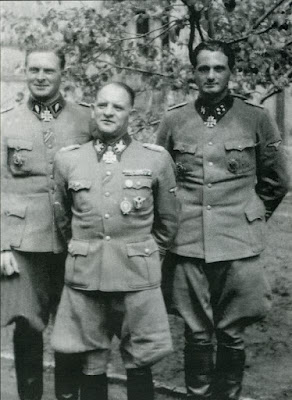 In November 1940 he took command of the 1st Company LSSAH which he commanded throughout the Balkan Campaign. After the start of Operation Barbarossa he was in July 1941 given command of the 3rd Battalion LSSAH. With this battalion he had a decisive impact on the subsequent battle, capturing a bridge over the Mius north of Taganrog. The bridge was then attacked by three Russian armored trains. Despite severe losses all three armored trains were destroyed. For this action Frey was awarded the German Cross in Gold

. Frey proved himself again in the fighting at Kharkov through his personal courage and leadership of his battalion.

and in July 1942 he took over the 1st battalion of the newly established 1st SS Panzer-Grenadier Regiment LSSAH.

For his achievements during the battle between the Donetz and Dnepr at the beginning of 1943, he was awarded the Knight’s Cross of the Iron Cross

, and a short time later he was appointed commander of the 1st SS Panzer Grenadier Regiment. He had a brief deployment in Italy, where he convinced an Italian General it was better to surrender than fight. He captured 10.000 prisoners.

He quickly returned to the Eastern Front for the Battle of Kursk where he commanded a battle group, consisting of his regiment, a Panther tank Battalion, an assault gun Company and an artillery Battalion, which fought in the Kiev region. For this successful defense, he received on 27 December 1943 the Oak Leaves to the Knight’s Cross . In March 1944 he now a SS Standartenführer

was given command of the 1st SS Panzer Division Leibstandarte SS Adolf Hitler and transferred to the area Kamanetz-Podolsk. In June 1944 the Division was in France for the Battle of Normandy, during which Frey was seriously wounded and had to give up command of the Division.

Later in August 1944, he became a staff officer in the headquarters of 6th.Panzer Army

At the end of the war he was a liaison officer to the Gauleiter for the Upper Danube. He subsequently fled abroad so as to escape captivity.

Albert Frey and his wife Lotte

The Doolittle Raid or Tokyo Raid.