the second son of local farmer Johann Wittmann and his wife Ursula. Michael hunted on his father’s farm land and became exposed to farming machinery during his childhood. In February 1934, Wittmann, Michael joined the Volunteer Labour Service, the FAD

(what later became the RAD)

, the NSDAP, NSDAP (Nr. 5.508.244) and on 30-10-1934 he joined the German Army. Wittmann, Michael was assigned to the 19th Infantry Regiment based at Freising by Munich, eventually reaching the rank of Gefreiter, lance-corporal. In October 1936 the 22-year-old Wittmann joined the Allgemeine SS.

(SS-Nr. 311.623). On 05-04-1937, he was assigned to the premier regiment, later division Leibstandarte-SS Adolf Hitler (LSSA and was given the rank SS man, a private. A year later, he participated in the occupation of Austria and the Sudetenland with an armoured car platoon. Wittmann, Michael also joined the Nazi Party. As with many other youths of his time, he joined the rapidly expanding German Wehrmacht on October 1934 as a private and joined in 1937 the elite “Leibstandarte SS Adolf Hitler” (LSSAH)( see Adolf Hitler) (did you know).

Wittmann who was married with Hildegard Burmester

served in a reconnaissance unit as driver and later as commander of a Sd.Kfz. 222, Leichter Panzerspähwagen, armoured car during the Polish and French campaign. After the French campaign in 1940, the LSSAH became re-equipped with six of the new Sturmgeschütz StuG III Ausf.A.

Wittmann was given command of one of these StuG IIIs armed with a 75mm short-barrelled gun and fought during the Balkan campaign in Greece. At the beginning of operation Barbarossa on 22-06-1941, SS-Unterscharführer Wittmann operated in South Russia, and showed to be an individualist who often operated separated. On his first day in Russia, he destroyed 6 T34/76 Russian tanks of a reconnaissance company during a Russian counter-attack and received the Iron Cross Second Class. Further actions in Russia awarded him the Iron Cross First Class and a place at the officer training Junkerschule in Bad Tölz, where he entered on 04-06-1942. After graduating from officer cadet school, Wittmann entered the panzer training grounds at Ploermel, where he saw for the first time the new Tiger tank. After completing his training with the revolutionary tank he met his new crew, including his Tiger gunner Balthasar “Bobby” Woll,

he died age 73, on 18-03-1996, loader, driver and radio operator. The Tiger’s slow rate of turret traverse was compensated with Wittmann’s experience with the turret less StuG, swinging the complete tank into the direction of the enemy, saving time and placing the heavy armoured front towards the enemy. Wittmann returned to Russia in January 1943, fighting in the Kharkov area during the winter of 1942-43, and during operation “Zitadelle” (Kursk) he destroyed 30 tanks, mainly T-34/76s and KV Is, and 28 anti-tank guns and two batteries of artillery. Wittmann who was called the “Black Baron” in reference to the “Red Baron” World War I fighter ace – Manfred von Richthofen,

especially hated anti-tank guns, which were often camouflaged and difficult to spot. During the period of January 13-14th, Wittmann reported that they had destroyed their 88th enemy tank, and both he and Bobby Woll received the Knight’s Cross for their brave and outstanding tactics and gunnery. On January 16th, a large group of Russian tanks, including T34/85s and KV Is, attacked the Leibstandarte positions, and Wittmann and his crew had destroyed some sixteen additional T34/85s

by the end of the day. He left the East Front with 119 destroyed enemy tanks on his name. He received the Ritterkreuz on 14-01-1944, the Oakleaves to his Knight’s Cross

on 30-01-1944 by Adolf Hitler himself, and was promoted to the rank of SS-Obersturmführer.

Wittmann was the commander of the Tiger tank which caused  the carnage at  on the road from Villers Bocage during the battle for Normandy. On 13-06-1944, Wittmann with his crew and former gunner Bobby Woll, who was by now a panzer commander, but was on that day Wittmann’s gunner since his own tank was damaged, set out an ordered reconnaissance patrol of the area in front of his company towards Balleroy and in the direction of a hill tactically marked height 213. Michael Wittmann here with Generaloberst der Panzertruppe, Heinz Guderian 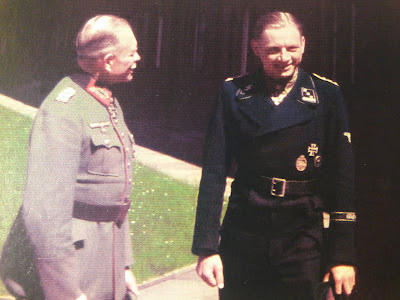 Rumors were that the Allies were surmounting a massive attack aimed at Panzer Lehr’s left flank. When Wittmann stopped his tank to listen for enemy sounds, an alarmed infantry squad reported to him that strange tanks were rolling down the road. As he emerged on foot from the cover of a small wood he witnessed the arrival of a large number of British tanks, half-tracks, and infantry support carriers belonging to the 4th County of London Yeomanry

The British were headed in the direction of Hill 213 and Wittmann realized that this unit was about to mount a flanking manoeuvre against Panzer Lehr. Near Villers Bocage the British stopped for vehicle maintenance and breakfast, not expecting to meet any German forces.

Baltazar  Woll, Wittmann´s the gunner.
Wittmann ran back to his Tiger, placed his crew on battle alert and although he was not able to establish contact with other units, or did not want to to maintain radio silence, he broke cover and moved off in the direction of the British headquarters section tanks protected between A and B squadrons. The first vehicles were twelve M3 half-tracks, which were destroyed using both MG-34’s. Next appeared three M5A1 Honey tanks which were fired upon with main gun rounds. The Tiger engaged the RHQ tanks inside Viller Bocage and knocked out three Cromwell tanks.  Wittmann then moved down the road and bumped into B squadron which was guarding the road to Caumont. Turning around to return to his company for additional vehicles he ran into a stalking Cromwell which fired two 75mm gun rounds that bounced off the thick armour. Wittmann’s gunner destroyed the Cromwell and they went back to their company area. After reporting to his commander SS Oberstgruppefùhrer, Josef “Sepp” Dietrich,

Wittmann returned in the afternoon with three Tigers and a PzKpfw IV Ausf. H to launch a counter-attack against A squadron and capture Villers Bocage

. By that time Cromwells, Sherman Fireflies and Bren Carriers towing anti-tank guns had halted on the side of the road, parked nose to tail, with their guns swung to the side. The British tank crews were dismounted taking a break and brewing tea, and recognition of a quick kill was instinctive. Wittmann and his crew knocked out the entire line of British vehicles as he moved past, impervious to everything that was fired in return. After regrouping, the four German vehicles entered the town where B squadron had taken up defensive positions together with some 6pdr anti-tank guns. One of the anti-tank guns immobilized Wittmann’s Tiger, and the crew had to escape.

Wittmann’s crew were, SS-Rottenführer, Bobby Woll, SS-Panzerschütze, Werner Irrgang, SS-Panzerschütze, Sepp Rässner and SS-Sturmmann, Eugen Schmidt. The other German tanks were knocked out by Firefly and Cromwell tank gun fire. The losses for the 7th Armored amounted to 25 tanks, 14 carriers and 14 half-tracks, the majority incurred during the morning. Despite the German losses, Wittmann’s single handed attack had inflicted such an overwhelming damage and a state of shock, that Panzer Lehr was saved from certain destruction. On the recommendation of General Bayerlein of Panzer Lehr, Fritz Bayerlein  who died in Würzburg, on 30-07-1970, age 71.

Wittmann was awarded the Swords to his Knights’ Cross with Oak leaf and was promoted on the spot to the rank of SS-Hauptsturmführer.

He was offered an appointment at an officers’ tactical school but refused.

On 08-08-1944, Anglo-Canadian forces launched Operation Totalize. Under the cover of darkness, British and Canadian tanks and soldiers seized the tactically important high ground near the town of Saint Aignan de Cramesnil. Here they paused, awaiting an aerial bombardment that signaled the next phase of the attack. Unaware of why the Allied forces had halted, Kurt Meyer,

of the 12th  SS Panzer Division

, ordered elements of his command to counterattack and recapture the high ground. Wittmann decided to participate in this attack, as he believed the company commander – who was supposed to lead the attack – was too inexperienced.

During the ongoing fight for Caen of Operation “Totalize” Wittmann’s tank, bearing the number 007, got a direct hit on 08-08-1944 near Cintheaux while engaging a superior force of Sherman Firefly tanks of the Northamptonshire Yeomanry

The hit in the right side of the vehicle resulted in an explosion and a secondary explosion blew the turret off, killing the entire crew, except “Bobby Woll”. SS Oberscharfführer, Woll was severely wounded and in a field hospital, but survived the war, and living in Wemmetsweiler he at the age of 73 died on 18-03-1996.

Hauptsturmführer, Michael Wittmann, age 30 and his crew’s bodies were moved from the unmarked field grave to the La Cambe war cemetery in Normandy in 1983, obvious still remembered and honored by ….. ?
.