Hauptmann and fighter pilot of Jagdgeschwader 3 and flying ace who was shot down over Britain and captured.

Body never found in the sea.

Werra, Franz Xaver von, born on 13-07-1914 at Leuk in the Berner Oberland region of Switzerland.

,the seventh of eight children of a Swiss aristocratic family in the canton of Valais. The son of Leo von Werra and Henriette, born von Wolff. After his father went bankrupt, Franz and his sister Emma were adopted in 1915 by the German couple Louisa and Oswald Carl-von Haber. There he experienced his sheltered childhood first in the Villa Donaueck (today house “Maria Trost”)

in Beuron near Sigmaringen in Baden-Württemberg. In 1925 the family moved to Cologne. Leo von Werra fell into deep debt after 1900 due to two unprofitable farms, the establishment of a power plant, a small plaster factory and expensive inventive patents. He lost his property in 1912, after filing a legally disputed bankruptcy. Leo von Werra fought in vain to bring about his rehabilitation until his death, lost many cases, unsuccessfully appealed to the Supreme Court of the Apostolic Signature, and eventually hoped to get help from Nazi Germany.  The impoverishment and divorce of his adoptive parents in 1932 brought him to the gym. SA in Hamm in 1933; enlisted in the Luftwaffe in 1935 and became a lieutenant in 1938.  He married he fiance Effi Traut

as appointed Adjutant on the Staff of II./Jagdgeschwader 3

under command of Oberst. Karl Vieck, on its formation at Zerbst on 01-02-1940. He participated in the French campaign, initially based at Phillippeville in France, and claimed his first victory on 20-05-1940, when he shot down a RAF

Hurricane near Arras. On 22 May, Leutnant von Werra

appeared over the airfield. He succeeded in shooting down two of them, the second near Albert, southwest of Cambrai after a lengthy 20-minute chase. By the conclusion of the French campaign von Werra had four victories to his credit.

On 28-08-1940, von Werra gained a measure of notoriety when he returned from a mission over England claiming nine RAF Hurricane fighters shot down over Kent. Although there were no witnesses his success was recognised and much propaganda made of his feat. It would appear that four victories were confirmed as von Werra’s fifth through eighth aerial victories and the remainder credited as ground victories. On 5 September, von Werra participated in a bomber escort mission to the area south of London. The formation encountered RAF Spitfire fighters and in the subsequent aerial combat, von Werra’s Bf 109 E-4 (W.Nr. 1480) “Black <”

received hits from friendly fire. He attempted to fly home alone but was pursued by a Spitfire and forced down near Marden. Von Werra was captured and following interrogation in Kensington Palace Gardens

in London he was shipped north to a prison camp near Grizedale Hall in the Lake District, which at the time was the only camp in Britain for captured officers.

Grizedale Hall (below) was also known as “U-Boat Hotel”, due to the large number of prisoners from that branch of the service. Following a punishment of solitary confinement, von Werra was shipped to another camp, Swanwick, near Nottingham. On 20-12-1940, he made his second escape. He was apprehended as he sat in the plane, trying to start the engine. In January 1941 von Werra was shipped to Canada for internment in a prisoner-of -war camp on the north shore of Lake Superior.  He was one of 33,800 German prisoners sent to Canada during World War II. On Wednesday January 22 a train full of German prisoners left the Nova Scotia port for a lengthy trip to Neys, Ontario. The journey took the train across through New Brunswick, Quebec City, Montreal, on to Smiths Falls.  For von Werra and another prisoner, Otto Hollman, this was their last stop. They both jumped a window of the train into a snow bank as it moved slowly through the railway yards in the bitter cold of the pre-dawn. Hollman was quickly apprehended in the same yards by Lance Corporal Lyle Thompson and CPR Constable Ernest Potter. Hollman was taken to the local jail where he entertained Police Chief John Lees on the right and Constable Reg Wride

, before being turned over to the military. Franz von Werra escaped detection and made his way to Johnstown on the St. Lawrence River, even though a search was soon mounted.  “Rural telephone operators cooperated by spreading alarm among farmers advising all to be on the lookout for suspicious characters.” Following a harrowing experience and with the help of a stolen rowboat, he made his way across the partially frozen river to Ogdensburg New York, on neutral American soil.  He was charged with illegal entry into the United States, but soon got to New York

Over the next several weeks von Werra was at the centre of a diplomatic tug-of-war, with the Canadian authorities trying to get him returned to Canada. By all accounts von Werra enjoyed his time in the limelight tremendously.  After some time in the United States, funded by German money he made his way into Mexico, on to Panama, Peru, Bolivia, and, by mid-April, to Rio de Janeiro. He flew back to Germany from Brazil. Von Werra was the only German prisoner of war held by the British to successfully escape and return to his homeland. Oberleutnant Franz von Werra was awarded the Ritterkreuz

on 14-12-1940 for eight aerial victories and five aircraft destroyed on the ground. Von Werra took this return to Germany also to marry, on August 22, with his girlfriend Elfi Traut 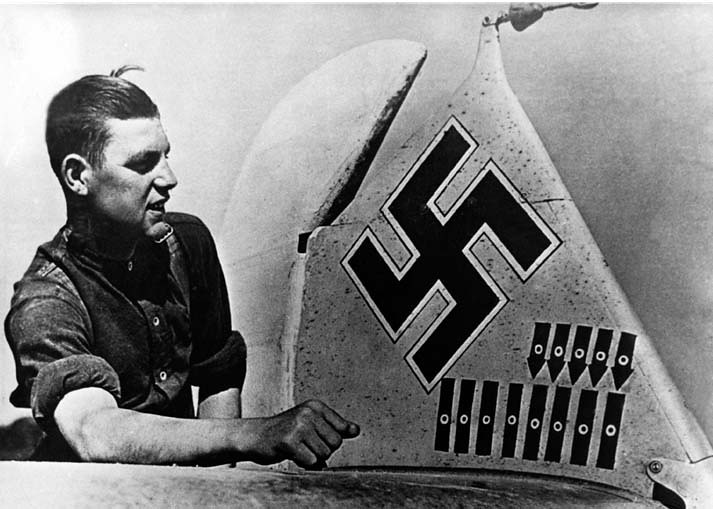 Baron von Werra married his girlfriend Elfi Traut on 22-08-1941 in the monastery church of Beuron, whom he had met, depending on the source, during a holiday in the Alps or near Königsberg.

began withdrawing from Russia to Germany for rest and re-equipment. By late September, the Gruppe had re-equipped with the new Bf 109 F-4 fighter and relocated to Katwijk in the Netherlands. During Operation Bodemplatte, the massed attack on Allied airfields on 01-01-1945, Jagdschwader 3

was one of the few German fighter units to carry out their operations successfully despite fielding the smallest German force that day. The 22 Fw 190s committed destroyed 43 Typhoons

and damaged 60 more in a 20-minute attack on the 2nd TAF airfield, Fliegerhorst, at my hometown Eindhoven. JG 3 claimed 116 destroyed). However the loss of 16 pilots was a serious blow to the unit. Six were captured, 6 were killed while four were posted as missing. Six pilots returned, three of them were wounded. One of them was Franz von Werra who took off in Bf 109 F-4 (W.Nr. 7285) on a practice flight on 25-10-1941. He suffered engine failure, crashed into the sea north of Vlissingen, in the Netherlands and was killed.

Franz von Werra was credited with 21 victories. He recorded 13 victories over the Eastern Front. His body was never found. There is a Memorial tombstone in Leuk-Stadt, the birth parish of Franz von Werra