a few weeks after Adolf Hitler (did you know), entered the Army with the 2nd Railway Regiment and Pilot Training,

now a Hauptmann. Till the end of the war Technical Officer with Bomber Wing 4 of the Supreme Army Command. Remained in the new Reichswehr as a Major and Staff Officer of Motor Transport Troops with the Military District Command III/3rd Division

Living in Berlin Zehlendorf, Friedrich Starke not a battlefield General died at the age of 73, on 02-12-1962 and is buried with his wife Magarete, who died age 87, on 30-01-1982, on the Waldfriedhof of Berlin Zehlendorf. The Generalleutnant der Artillerie, Commander 265th Infantry Division

and Generaloberst der Flieger, the most decorated Generals of the former Luftwaffe, commander Luftflote 1, Air Fleet I 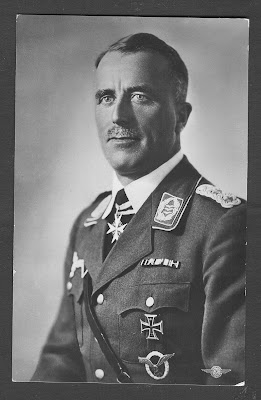 are buried close by. Also buried there are Hildegard Knef and Willy Brandt.