Pujol Garcia, Joan “Garbo”, born 14-02-188 in the Catalan city of Barcelona, Spain, to Juan Pujol, a Catalan who owned a factory that produced dye, and Mercedes Guijarro Garcia, from the Castilian town of Motril in the Province of Granada. The third of four children, Pujol was sent at age seven to the Valldèmia boarding school run by the Marist Fathers in Mataró, twenty miles from Barcelona and remained there for the next four years. The students were only allowed out of the school on Sundays if they had a visitor, so his father made the trip every week. His mother came from a very strict Catholic family who took communion every day, but his father was much more secular and had liberal political beliefs. At age thirteen, he transferred to a school in Barcelona run by his father’s card-playing friend Father Mossen Josep, where he remained for three years. After an argument with a teacher, he decided that he no longer wished to remain at the school, and became an apprentice at a hardware store. Pujol engaged in a variety of occupations prior to and after the Spanish Civil War, such as studying animal husbandry at the Royal Poultry School in Arenys de Mar and managing various businesses, including a cinema. His father died a few months after the Second Republic’s birth in 1931, while Pujol was completing his education as a poultry farmer. Pujol’s father left his family well-provided for, until his father’s factory was taken over by the workers, around the Spanish Civil War’s start. Bahamond Franco

. In 1931, Pujol did his six months of compulsory military service in a cavalry unit, the 7th Regiment of Light Artillery. He knew he was unsuited for a military career, hating horse-riding and claiming to lack the “…essential qualities of loyalty, generosity and honor”.

he is best known for his British codename, “Garbo.” As a double agent (“Arabel” for the Nazis), he played a main role in the “Operation Fortitude”, he created a network of fictional agents and gave to the Nazis false information about the invasion of Normandy. France was the crux of the Bodyguard plan; as the most logical choice for an invasion the Allied high command had to mislead the German defences in a very small geographical area. In his memoirs General Omar “Brad” Bradley called Bodyguard the “single biggest hoax of the war”. Pujol operated as a double agent under the XX Committee’s aegis. Mills spoke no Spanis, and passed his case over to a Spanish-speaking officer named Tomás (Tommy) Harris.

For his services to the German war effort Arabel was awarded the Iron Cross Second Class on 29-07-1944. This was normally reserved for front-line fighting men and required Hitler’s (see Hitler) personal authorization. For his efforts aiding the Allies Garbo received an MBE from King George VI

, on 25-11-1944. The Iron Cross was presented via radio and he received the physical medal from one of his German handlers after the war had ended. The Nazis never realised that Garbo had fooled them, and thus he earned the distinction of being one of the few – if there were any others – during World War II to receive decorations from both sides.

After the war, he moved to Venezuela where he lived in anonymity the rest of his life. He died at the age of 75 in Venezuela and is buried on the Cementerio de Choroní, Estado Aragua. 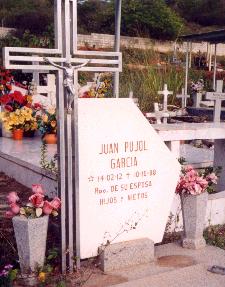