the oldest of three children of the lawyer, Harry Robert Parsons, and his wife Clara, born Doolittle. Clara was the granddaughter of James Rood Doolittle,

who served as US Senator from Wisconsin between 1857 and 1869, and of Joel Aldrich Matteson,

Governor of Illinois from 1853 to 1857. In 1909, the family moved to Fort Sumner, New Mexico, where William learned to speak fluent Spanish. He attended the local schools in Fort Sumner and was home schooled by his mother for a time. He commenced at Santa Rosa High School, where his mother taught English and Spanish, rapidly advancing through three years in just one. In 1917 he attended Fort Sumner High School, from which he graduated in 1918. He graduated in 1922 of the United States Naval Academy

, Parsons served on a variety of warships beginning with the battleship USS Idaho. He was trained in ordnance and studied ballistics under Louis Ten Eyk Thompson, an American physicist interested in thermodynamics and ballistic

at the Naval Proving Ground in Dahlgren, Virginia. Thompson died age 87 on 12-12-1978. In July 1933, William became liaison officer between the Bureau of Ordnance and the Naval Research Laboratory (NRL). He became interested in radar and was one of the first to recognize its potential to locate ships and aircraft, and perhaps even track shells in flight. In September 1940, Parsons and Merle Tuve of NDRC began work on the development of the proximity fuze, a radar-trigged fuze that would explode a shell in the proximity of the target. The fuze, eventually known as the VT fuze, Mark 32, went into production in 1942. Parsons was on hand to watch

the USS Helena shoot down the first enemy aircraft with a VT fuze in the Solomon Islands in January 1943. In June 1943, Parsons joined the Manhattan Project as Associate Director at the research laboratory at Los Alamos, New Mexico under J. Robert Oppenheimer and General Leslie Richard Groves

. Oppenheimer died age 62, on 18-02-1967. Parsons became responsible for the ordnance aspects of the project, including the design and testing of the non-nuclear components of nuclear weapons. In a reorganization in 1944, he lost responsibility for the implosion-type fission weapon, but retained that for the design and development of the gun-type fission weapon, which eventually became Little Boy.

He was also responsible for the delivery program, codenamed Project Alberta. In August 1945 he participated in the bombing of Hiroshima as weaponeer on the B-29 Enola Gay.

Parsons climbed into the bomb bay to load the powder charge, so as to avoid the possibility of a nuclear explosion if the aircraft crashed and burned on takeoff. He was awarded the Silver Star for his part in the mission. After the war, Parsons was promoted to the rank of Rear Admiral without ever having commanded a ship. He participated in Operation Crossroads, the nuclear weapon tests at Bikini Atoll

in 1946, and later the Operation Sandstone tests at Enewetak Atoll in 1948. In 1947, he became deputy commander of the Armed Forces Special Weapons Project. 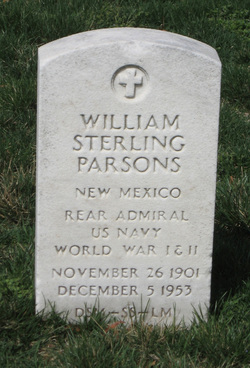