Oberst, and the commander of the II Battalion of the 164th Infantry Regiment.

He lost his command of the 194th to Generalleutnant Josef Folttmann,

the 164th was reorganized as Fortress Division Kreta. The Allies lost 1.742 dead, with a similar number wounded, as well as 12.254 Commonwealth and 5.255 Greek captured. There were also 1.828 dead and 183 wounded among the Royal Navy. After the war, the Allied graves from the four burial grounds that had been established by the German forces were moved to Suda Bay War Cemetery. 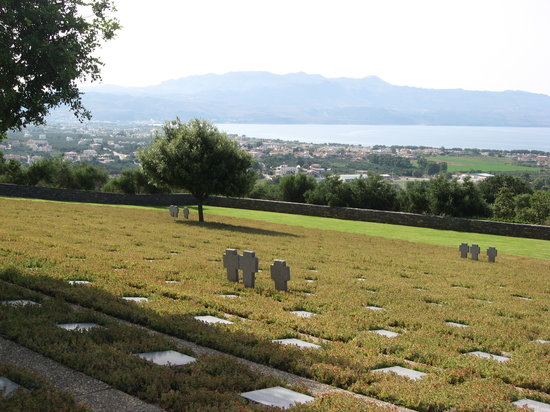 The Germans lost at least 12.000 killed and wounded, and about 5.000 drowned, buried on the German cemetery near Maleme.. The Luftwaffe also lost heavily in the battle; 220 aircraft were destroyed outright and another 64 were written off due to damage, a total of 284 aircraft lost, with several hundred more damaged to varying degrees. 311 Luftwaffe aircrew were listed as killed or missing, and 127 more were wounded.  A large number of civilians were killed in the crossfire or died fighting as partisans. Many Cretans were shot by the Germans in reprisals, both during the battle and in the occupation that followed. One Cretan source puts the number of Cretans killed by German action during the war at 6.593 men, 1.113 women and 869 children. German records put the number of Cretans executed by firing squad as 3.474, and at least a further 1.000 civilians were killed in massacres late in 1944.

is almost his closest neighbour. Also buried close by are the former member of the cabinets Franz “Fränzchen” von Papen

and father of the V1 V2 builder Wernher von Braun

and a member of the Cabinets von Papen and Schleicher Freiherr Magnus von Braun.