as son of Servais and Jessie Amelia Corteil, Watford, Hertfordshire was a dog handler with the 9th Battalion Parachute Regiment

the shattered remains of the 6th Airborne forces were eventually withdrawn south of the Rhine. The 1st Airborne Division, under command of Major-General Roy Urquhart ,

had lost 8.000 men during the battle and never saw combat again. Urquhart died on 13-12-1988, aged 87, Menteith, Perthshire, Scotland. Two American and one British Airborne divisions spearheaded the invasion of Normandy on D-Day

. The 6th British Airborne Division was tasked to seize and hold the left flank of the British sea-borne assault due to land at dawn on the 6th June. It was to capture the Orne River and Canal bridges at Benouville, destroy the heavy German coastal battery at Merville overlooking the Orne Estuary and blow bridges across the flooded River Dives to the east to prevent German reinforcements moving against the Invasion bridgehead.

made the D-Day jump with his dog “Glenn”

on the early hours of 6 June 1944 in the Orne River Valley to secure the flanks of the landings and knock out the Merville Battery which imposed a threat to the British landing beaches. Corteil and Glenn were among the many who missed their night time landing zone. Corteil, Glenn and the other Paratroopers were making their way to the rallying point to attack the Merville Battery. He joined a group led by Brigadier Stanley “James” Edger Hill

commanding officer of 3rd Parachute Brigade. Hill survived the war and died very old age 95 on 16-03-2006. The group began making their way from the drop zone, near Varaville, towards the Merville Battery and the area where 9 Parachute Battalion should be after their attack on the German battery.

The Paratroopers were dogged by the flooded flat lands, German Patrols and travelling in the dark. The British Air Force had orders to strafe at any movement in certain areas along the Orne River Valley to keep the Germans in check and protect the Airborne Landings. The Paratroopers ended up in one of these areas that the British Pilots had orders to fire on. The British Paratroopers were attacked by friendly fire and Private Corteil, Glenn and other paratroopers were killed as well as some being wounded. Private Corteil and his dog “Glenn” are buried together. It is believed that this is the only war time grave burial with a dog handler and his dog.  It was later discovered that the aircraft that strafed them were Royal Air Force Typhoons on sorties to disrupt the enemy behind lines. Unfortunately, the pilot had mistaken the group of British paratroopers for a German patrol, resulting in the ‘blue on blue’ incident; or what is more commonly known today as ‘friendly-fire’. Three months later Brigadier James Hill ordered Major (later Lieutenant Colonel) Napier Crookenden

, who had by that time taken over command of 9th Parachute Battalion after Lieutenant Colonel Terence Otway

had been wounded, to send a party out to the lane where he had been wounded in an attempt to locate and bury the bodies of the dead. Napier Crookenden died on the 31-10- 2002 aged 87 and Terence Otway died also very old age 91 on 23-07-2006. Major Allen Parry

, commanding officer of A Company, went out with the party which included Captain, Rev John Gwinnett

. The soldiers were soon found having been roughly buried in a bomb crater. Among them were private Emile Servais Corteil and his paradog Glen not far away on the Pegasus Bridge. Allen Parry died on 20-01-1992 and his brother, the Reverend George Edward Maule Parry age 29 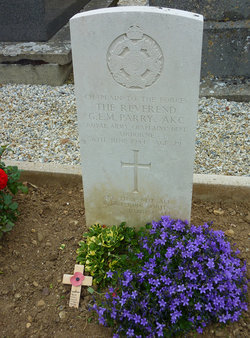 ,  served with the 7th (Light Infantry) Parachute Battalion and was killed in 1944 in Normandy.

at the age of 26, was killed as the first Allied soldier on D-day. Corteil died at the age of 19 and Emile and his dog are reburied on the war cemetery of Ranville, plot 1.
It is therefore quite unique that a dog is given to its companion. There is, however, an appreciation for animals that have committed themselves several times during wars. The highest award for British soldiers is Victoria Cross, for animals this is the Dickin Medal.

The Dickin Medal was conceived by the founder of the PDSA (People’s Dispensary for Sick Animals) in 1943 to honor animals for their efforts. It is a bronze medal with the words “For Gallatry” and “We also Serve”. Until 1949 the medal was awarded to 32 pigeons, 3 horses, 1 (ship) cat and 18 dogs. In 2000 the medal was re-introduced and 11 dogs were added, plus 1 to the horses who had given their lives in the First World War. The last one was on a horse in 2016 that had helped American Marines by only delivering goods 51 times during the Korean War. Glen, the paradog, has not received a Dickin Medal, but does rest with his supervisor Emile Corteil.