was an United States Navy corpsman during World War II and one of the six men who took part in raising the flag on Iwo Jima. Bradley was already on the summit of Mount Suribachi with his platoon, when Sergeant Michael Strank Corporal Harlon Block PFC Ira Hayes PFC Rene Gagnon and PFC Frank Sousley, who had a larger flag on orders to place it so that it could be seen from great distance, asked him to lend them a hand in raising the flag attached to a heavy length of pipe.

He was the last surviving of the six men. When he was 19, his father suggested he enlist in the Navy so he could avoid ground combat. As a Hospital Corpsman assigned to the Marines, he took part in the assault on Iwo Jima, one of the most bitterly fought battles of the Pacific War’s island hopping campaign. He was then assigned to the 2nd Battalion 28th Marines

, of the 5th Marine Division

On seeing a wounded Marine, Bradley rushed to his aid through a mortar barrage and heavy machine gun fire. Although other men from his unit were willing to help him with the casualty, Bradley motioned them to stay back. Shielding the Marine with his own body, the hospital corpsman administered a unit of plasma and bandaged his wounds. Through the gunfire, he then pulled the casualty 30 yards to safety. Shortly after he was hit by shrapnel in both his legs.

Bradley made the long trip through the casualty evacuation chain. He was sent first to his battalion aid station, then to the field hospital on Iwo. Once it was discovered that Bradley was one of the flag raisers, he was sent with the other two living participants to Washington. The flag raising image was reproduced on posters for the 7th War Loan drive, and the men were sent around the country to make speeches urging Americans to buy bonds.

John Bradley had a heart attack, but died of a stroke at 2:12 am in an Antigo hospital on 11-01-1994, at the age of 70, the last of the six men who raised the second flag to die. He is buried on Queen of Peace Catholic Cemetery in Antigo Wisconsin, USA. 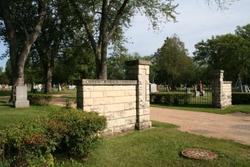