Ludwig Beck was born in Biebrich, Germany, on June 29, 1880. He joined the German Army and by 1933 became Adjutant General of the army. Two years later he was promoted Chief of General Staff. 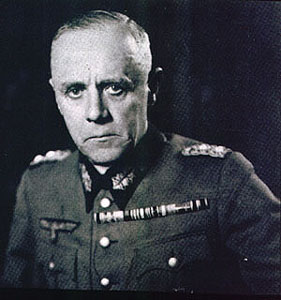 Beck opposed attempts by Adolf Hitler and the Nazi Party to takeover the army. In 1938, he sent an emissary to London in an attempt to get Neville Chamberlain to promise military action if Germany invaded Czechoslovakia.

When Adolf discovered that Beck was plotting against the regime and he was removed from office. Replaced by Franz Halder , Beck continued to work closely with other opponents of Hitler including Carl Goedeler

Goerdeler was interrogated and tortured for five months before being executed on February 2, 1945, age 61, Wilhelm Canaris

In the early months of 1944 Beck approached Erwin Rommel

about joining the July Plot. Rommel refused, criticizing the tactic of assassination claiming that it would turn Adolf Hitler into a martyr. Instead he suggested that he should be arrested and brought to trial. He on 14-10-1944, enforced suicide, age 52, Herrlingen.

Suspected in being involved in the July Plot, Beck was arrested by on July 20, 1944. General Erich Fromm

took him into custody and demanded that he commit suicide. He succeeded only in severely wounding himself and a sergeant finished the job by shooting him in the back of the neck, age 56.

General Erich Fromm, didn’t escape himself and was found guilty too and executed on March 12, 1945, also age 56.

Hitler had to live in homeless shelters for a while: