The SA was founded in Munich by Hitler in 1921 out of various roughneck elements that had attached themselves to the fledgling Nazi movement. It drew its early membership largely from the Freikorps (Free Corps), armed freebooter groups, made up largely of ex-soldiers, that battled leftists in the streets in the early days of the Weimar Republic

. Outfitted in brown uniforms after the fashion of Benito Mussolini’s 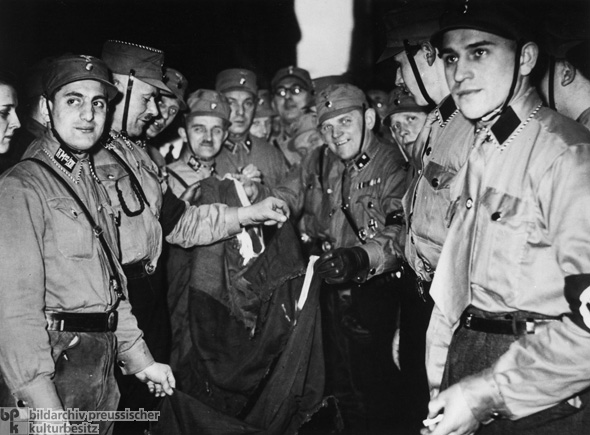 . Temporarily in disarray after the failure of Hitler’s Munich Putsch in 1923, the SA was reorganized in 1925 and soon resumed its violent ways, intimidating voters in national and local elections. From January 1931 it was headed by Ernst Röhm,

who harboured radical anti capitalist notions and dreamed of building the SA into Germany’s main military force. Under Röhm SA membership, swelled from the ranks of the Great Depression’s unemployed, grew to 400,000 by 1932 and to perhaps 2,000,000—20 times the size of the regular army—by the time that Hitler came to power in 1933.

During the early days of the Nazi regime, the SA carried out unchecked street violence against Jews and Nazi opponents. But it was eyed with suspicion by the regular army and by the wealthy industrialists, two groups whose support Hitler was trying to secure. Against Hitler’s expressed wishes, Röhm continued to press for a “second Nazi revolution” of a socialist character, and he hoped to merge the regular army with the SA under his own leadership. On June 30, 1934, the Night of the Long Knives, Die Nacht der langen Messer, Hitler, using SS forces, carried out a “Blood Purge” of the SA leadership. Röhm and dozens of SA leaders were summarily executed. Röhm was shot in prison, after he refused to commit suicide, by Theodor “Papa” Eicke

.Lippert described as “filled with a dangerous and unrepentant fanaticism”, died age 72 on Lippert died on 1 September 1969, in Wuppertal..

Thereafter the SA, reduced in strength, continued to exist but ceased to play a major political role in Nazi affairs. From 1939 it was in charge of training all able-bodied men for Home Guard units.

The SA was effectively superseded by the SS under Reichsführer Heinrich Himmler,

although it was not formally dissolved until after the Third Reich’s final capitulation to the Allied Powers in 1945. Hitler´s plans for the new Berlin.

Ardenne Abbey massacre
Landsberg Prison is a penal facility located in the town of Landsberg am Lech.