. When she was at home he telephoned her most days and wrote to her every week. He continued to call her by her childhood nickname “Püppi” throughout his life. She accompanied her father on some official duties. In 1941 he took her with him when he visited Dachau Concentration Camp.

Gudrun Himmler, the daughter of Heinrich Himmler and Margarete Himmler,

was born on 8th August, 1929. Although separated from his wife, Himmler remained close to his daughter. Her father had one of the most powerful roles during the Holocaust, but Gudrun refused to see it. Her love and respect for her father kept her alive and constantly fighting for her name. “At fourteen,

she cut out every picture of him from the newspapers and glued them into a large scrapbook”. After they were captured, Gudrun and her mother were put in jail after jail and left with nothing. 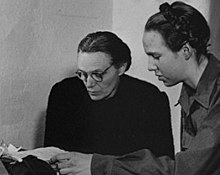 Even through the ruthless interrogations at the Nuremberg trials, “she vowed herself to him. She did not weep, but went on hunger strikes. She lost weight, fell sick, and stopped developing”. When Gudrun found out that her father had committed suicide, “the fifteen-year-old suffered a psychological and medical breakdown. Shivering…day and night she lay delirious on the bed in her cell”. Ever since she has refused to believe that Himmler committed suicide, claiming instead the British killed him.

Even after the trials were over, Gudrun and her mother were forced to live in a protestant nursing home at Bethel under an alias, because they did not have any money or valuables. Due to the fact that she refused to take on another name, she constantly had “to start from scratch, introduce herself, say her name, her father’ s name”. Even through her adulthood, Gudrun stayed faithful to her father.

In a 1999 interview she talked about trying to save enough money to go to America and examine the evidence that would help her compare her childhood memories with the documents stating her father’s views, and the orders he gave. Ultimately, her goal is to write a book called “simply Heinrich Himmler…to clear her father’s name”.

an organization providing support to arrested, condemned or fugitive former SS-members. According to journalist Andrea Roepke: “The Silent Help is not only about former National Socialists. It collects money, too, for the neo-Nazi movement.” Over the years she has given help to people like Anton Malloth

, “der schöne Toni” (The handsome Toni). a supervisor of Theresienstadt. She arranged his stay at an expensive nursing home in Pullach, until he was sentenced to life in prison.Ten days before his death on 31-10-2001, age 90, cancer-suffering Malloth was declared unfit for prison and released to Straubing. She also provided help to Klaas Carel Faber

, a convicted Dutch Nazi. Gudrun retains her father’s fascist views and has been described by Oliver Schröm as a “flamboyant Nazi princess”. Now she is still living with her husband in Munich, age 86.

Interesting fact:
Hermann Goering said about Himmler: “If I looked like Himmler I wouldn’t go on about the master race so much.”

a former Nazi prison guard and a fugitive war criminal. In 2001, Malloth was convicted of beating at least 100 prisoners to death at the Theresienstadt concentration camp, including Finkelgrun’s father in 1943. Ten days before his death on 31-10-2002, age 90, cancer-suffering Malloth was declared unfit for prison and released.

Gudrun Margarete Elfriede Emma Anna “Püppi” Himmler Burwitz, died on 24 May 2018 at her home near Munich at the age of 88.