Angela Maria “Geli” Raubal was born in Linz 04-06-1908, where she grew up with her brother, Leo, and a sister, Elfriede. Her father died at the age of 31, when Geli was two. She and Elfriede accompanied their mother when she became Hitler’s housekeeper in 1925; Raubal was 17

at the time and spent the next six years in close contact with her half-uncle, who was 19 years her senior. Her mother was given a position as housekeeper at the Berghof villa near Berchtesgaden in 1928. Raubal moved into Hitler’s Munich apartment, Prinzregentenplatz 16,

in 1929 when she enrolled in medicine at Ludwig Maximillian University. She did not complete her medical studies.

As he rose to power as leader of the Nazi Party, Hitler was domineering and possessive of Raubal, keeping a tight rein on her. When he discovered she was having a relationship with his chauffeur, Emil Maurice,

he forced an end to the affair and dismissed Maurice from his service.

After that he did not allow her to freely associate with friends, and attempted to have himself or someone he trusted near her at all times, accompanying her on shopping trips, to the movies, and to the opera.

Raubal was in effect a prisoner, but planned to escape to Vienna  to continue her singing lessons. Her mother told interrogators after the war that her daughter was hoping to marry a man from Linz, but that Hitler had forbidden the relationship. He and Raubal argued on 18 September 1931—he refused to allow her to go to Vienna. He departed for a meeting in Nuremberg, but was recalled to Munich the next day: Raubal was dead from a gunshot wound to the lung; she had shot herself in Hitler’s Munich apartment with Hitler’s Walther pistol

. She died 18-09-1931 she was 23 years old. Rumours immediately began in the media about physical abuse, a possible sexual relationship, and even murder. Historian Ian Kershaw contends that stories circulated at the time as to alleged “sexual deviant practices ought to be viewed as … anti-Hitler propaganda”. The police ruled out foul play; the death was ruled a suicide. Hitler was devastated and went into an intense depression. He took refuge at a house on the shores of Tegernsee Lake, and did not attend the funeral in Vienna on 24 September. He visited her grave at Vienna’s Zentralfriedhof (Central Cemetery) two days later. Thereafter, he overcame his depression and refocused on politics. Hitler later declared that Raubal was the only woman he had ever loved.

Her room at the Berghof was kept as she had left it, and he hung portraits of her in his own room there and at the Chancellery in Berlin. 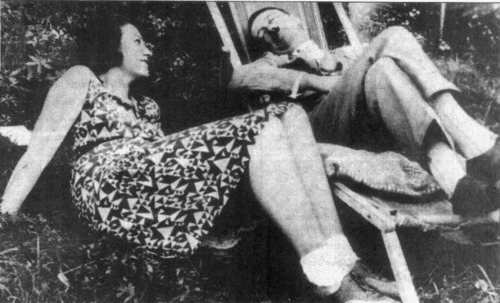 1st Provisional Marine Brigade in the Battle for Guam.