On Memorial Day and Veterans Day, we remember and celebrate all Americans who served in the military. March 13, 1942 was the birthday of the U.S. K9 Corps, and here are five dogs who also bravely served their country. Their acts of heroism should not be forgotten.

Chips was a Collie-German Shepherd-Siberian Husky mix who was the most decorated dog in World War II. The pooch saw action in Germany, France, North Africa, and Sicily. Among the animal’s heroic exploits are his assault on an Italian machine-gun nest and helping take 10 enemy Italian soldiers captive.  Chips was awarded the

for his actions; unfortunately, the commendations were revoked as military policy at the time didn’t allow such recognition for animals.

The dog returned to his home in Pleasantville N.Y., in 1945.

Kaiser was a German Shephers who served in Vietnam under his handler Marine Lance Cpl. Alfredo Salazar. Kaiser and Salazar

did more than 30 combat patrols and participated in 12 major operations together. After the pair joined “D” Company for a search-and-destroy mission, they were ambushed by enemy forces while on patrol in 1966. Kaiser was hit in the initial barrage and died while trying to lick Salazar’s hand. Kaiser was the first war dog killed in action during the Vietnam War.

were on patrol at a cemetery near the company’s airbase in Vietnam. The two came under enemy fire: and the German Shepherd took a round to his eye, and Throneburg was shot in the shoulder after killing two Viet Cong guerillas. Undaunted, Nemo still attacked the enemy, which gave Throneburg the precious minutes he needed to call in reinforcements. After Throneburg fell unconscious, Nemo crawled on top of the soldier’s body to protect him from harm. The dog didn’t let anyone touch his fallen handler; it took a veterinarian to remove Nemo (Nemo and Throneburg later recovered from their wounds) 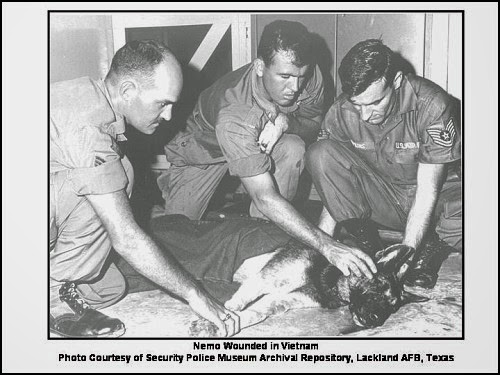 . Nemo was later given a permanent retirement kennel; he died when he was 11 years old in December 1972.

A Yorkshire Terrier who saw action in the Pacific during World War II, Smokey was initially found in February 1944, abandoned in a foxhole in the jungles of New Guiea  The dog was included in a dozen combat missions and survived more than 150 air raids. Like famous World War I veteran Stubby, Smoky used her sharp sense of hearing to warn of incoming artillery shells.

One of Smoky’s most famous exploits was at a crucial airstrip in the Philippine Island of Luzon. The dog pulled a telegraph wire through a narrow 70-foot pipe, saving construction time and keeping workers and engineers safe from enemy fire. When not in harm’s way, Smoky entertained troops with a variety of tricks and self-taught antics. The dog died on February 21, 1957; she was 14 years old. Smoky’s exploits are chronicled in detail in the book Yorkie Doodle Dandy, written by her adoptive owner William A. Wynne.

Probably the most famous war dog, this American Pit Bull Terrier was the only dog to be given the rank of sergeant. Stubby was found as a stray on the Yale campus in 1917, and smuggled to France during World War I by his adoptive owner, Corporal John Robert Conroy.

The dog’s heroic acts include participating in 17 battles, four offenses, and improving troop morale. He also used his keen senses to warn his unit of poison-gas attacks, incoming artillery fire, and to locate downed soldiers on the battlefield (they were also put to good use when he sniffed out and apprehended a German spy lurking in the trenches). Stubby is remembered today: the Pit Bull-centric website, Stubby dog org, is named after him, as is the Stubby Award for Canine Heroism. Stubby died in his owner’s arms in 1926.