The Battle of Britain, Luftschlacht um England, literally “Air battle for England” is the name given to the Second World War air campaign waged by the German Air Force (Luftwaffe) against the United Kingdom during the summer and autumn of 1940. The Battle of Britain was the first major campaign to be fought entirely by air forces, and was also the largest and most sustained aerial bombing campaign to that date.

The German objective was to gain air superiority over the Royal Air Force (RAF), especially Fighter command und Bomber Harris (see Bomber Harris). From July 1940, coastal shipping convoys and shipping centres, such as Portsmouth, were the main targets; one month later, the Luftwaffe shifted its attacks to RAF airfields and infrastructure. As the battle progressed, the Luftwaffe also targeted aircraft factories and ground infrastructure. Eventually the Luftwaffe resorted to attacking areas of political significance and using terror bombing strategy. By preventing Germany from gaining air superiority, the British forced Hitler to postpone and eventually cancel Opersation Sea Lion, a planned amphibious and airborne invasion of Britain. However, Germany continued bombing operations on Britain, known as The Blitz. The failure of Germany to achieve its objectives of destroying Britain’s air defences, or forcing Britain to negotiate an armistice or even an outright surrender, is considered its first major defeat and a crucial turning point in the Second World War.

The Battle of Britain has an unusual distinction in that it gained its name prior to being fought. The name is derived from a famous speech delivered by Prime Minister Winston Churchill (see Churchill) in the House of Commons more than three weeks prior to the generally accepted date for the start of the battle.

The air offensive against the RAF and British industry failed to have the desired effect. More might have been achieved had the OKL exploited their enemy’s weak spot, the vulnerability of British sea communications. The Allies did so later whenRAF Bomber Command targeted rail communications and the United States Army Air Forces targeted oil, but that would have required an economic-industrial analysis of which the Luftwaffe was incapable. The OKL instead sought clusters of targets that suited the latest policy (which changed frequently), and disputes within the leadership were about tactics rather than strategy. Though militarily ineffective, the Blitz caused enormous damage to Britain’s infrastructure and housing stock. It cost around 41,000 lives, and may have injured another 139,000. 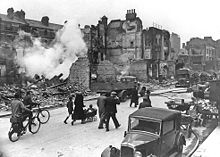 SS Standartenführer Walter Blume responsible for the deportation of over 46,000 Greek Jews to Auschwitz.

The largest gun ever used in battle.
Holocaust in the Netherlands.