Wilhelm Brasse (3 December 1917 – 23 October 2012) was a Polish professional photographer and a prisoner in Auschwitz during World War II. He became known as the “famous photographer of Auschwitz”.

Brasse was of mixed Austrian-Polish descent. He learned photography in Katowice at the atelier of his own aunt. After the 1939 German invasion of Poland and occupation of Brasse’s hometown Zywiec, in southern Poland, he was interrogated by the Schutzstaffel (SS).

He refused to swear allegiance to Hitler, and was imprisoned for three months. After his release, still refusing to capitulate to the Volkliste and forced membership of German Army, he tried to escape to Hungary and join the Polish Army in France but was captured, along with other young men, at the Polish–Hungarian border and deported to KL Auschwitz-Birkenau as prisoner number 3444. Trained before the beginning of World War II as a portrait photographer in Silesia, he was ordered by the SS camp administrators to photograph “prisoners’ work, criminal medical experiments, [and] portraits of the prisoners for the files. Brasse has estimated that he took 40.000 to 50000 “identity pictures” from 1940 until 1945, before being moved to another concentration camp in Austria, where he was liberated by the American forces in May 1945.

While many of Brasse’s photographs did not survive, some are on display in the Auschwitz-Birkenau State Museum and at Yad Vashem, the Holocaust Martyrs’ and Heroes’ Remembrance Authority, Israel‘s official memorial to the Jewish victims of the Holocaust. 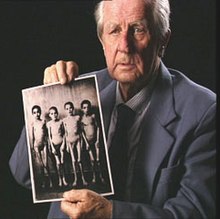 Werner Goldberg a German who was of half Jewish ancestry, and whose image appeared in the Berliner Tageblatt as “The Ideal German Soldier”,