grew up in a small village in Romania in the 1940s. Theirs was the only Jewish family in the region.

“My father said as long as you say your prayers, did the good deeds that God wanted you to do, and lived so far away from the big city – that somehow we’d escape,” Eva said. “The Nazis won’t come here for six Jews.”

But they did come. At the age of 10, Eva was loaded on to a crowded cattle car with her family and relocated to Auschwitz.

“The cattle car door’s opened. We heard a lot of Germans yelling orders. My mother’s holding on to Miriam and me. My father’s standing right by us, with my two older sisters,” Eva said. “Very unfriendly sight. Everything seemed to be dark gray. Tall, barbed wire. Strange. Very, very, menacing looking. I said to myself, ‘If ever there was a hell on earth, this must be it.’ My father and two older sisters disappeared into the crowd. Thirty minutes after we stepped down, Miriam and I no longer had a family. We were all alone in this place where there was nowhere to turn for help.”

Eva’s experience – her first night in Auschwitz – prepared her for what she would face throughout her imprisonment.

“There were scattered naked corpses of three children. Their bodies were shriveled and this is when I realized, at age ten, that that could happen to Miriam and me also; unless I did something to prevent it,” Eva said. “Why didn’t they do something to stay alive? I will not let that happen to Miriam and me. The only thing I could think of was:  I was going to make a silent pledge that I am going to do everything in my power to not end up like them on the latrine floor.”

Eva’s pledge would be tested, over and over again throughout her captivity, by Dr. Josef Mengele

, the notorious ‘Angel of Death’ of Auschwitz. in Block 10.

performed horrific experiments on his victims, studying the effects of drugs and poisons on twins, using one as the human guinea pig, the other as the controlled.

“Doctor injected us three times a week with all kinds of germs and drugs and chemicals,” Eva said. “After one of those injections I became unbelievably sick. So next morning, Dr. Mengele came in with four other doctors, and he said, ‘She only has two weeks to live.’ I refused to accept his verdict.”

For the next two weeks, Eva was in and out of consciousness, often waking up on the floor, crawling to a water faucet – never making it, but somehow convincing herself to survive.

“I actually made a pledge that I refused to die, and I would do anything in my power to prove Dr. Mengele wrong; to survive, and to be reunited with my sister. Would I have died, she would have been rushed to Mengele’s lab and killed,” she said. “But I spoiled their experiment. I survived.”

After nine months of experiments in captivity, Eva and her sister were liberated from the horrors of Auschwitz by Russian troops. Though free, Eva was held captive by a different kind of prison, one of bitterness and unforgiveness.

She remained in her invisible cell until the 50th anniversary of the liberation of Auschwitz. While visiting the camp where so many horrible events shaped her life, Eva made another kind of pledge. She forgave.

“As I was standing by the ruins of the gas chamber I was remembering all the people I was forgiving. I was forgiving the Nazis. I was forgiving Mengele. I was forgiving the people that did the experiments,” she said. “I was forgiving everybody because of the fact that I have the power to forgive. It gave me an emotional freedom that was so exhilarating, so beneficial to me, that I did not have to deal with who did what to me and why. Immediately, I felt that all the pain I was carrying on my little shoulders were lifted from me; that I was free. I was no longer a prisoner from my tragic past.”

in the memory of her sister Miriam, who died of cancer in the 90s. She also shares her experiences from her time at Auschwitz, and the lessons she learned on the path to forgiveness. 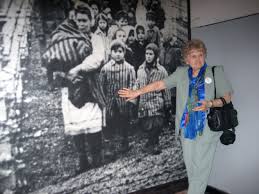 “God has a power to forgive, to forgive us, and forgive other people,” Eva said. Her message now is simple – forgive – even your worst enemies.

“I have personally experienced the act of forgiveness that gave me my emotional freedom. No human being can be free:  emotionally free, and mentally free, without forgiving people who have wronged them,” Eva said.

Hermann Goering was an extravagant person.