The Guns of Navarone.

Written by Alistair MacLean in 1957, The Guns of Navarone was made into a movie in 1961 starring Gregory Peck

. The story centers on attempts to destroy a German fortress on an island in the Aegean sea.

While there is no island named Navarone, the story is based on the Battle of Leros, part of the 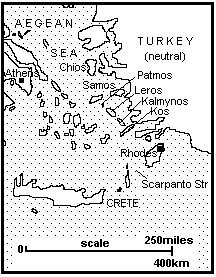 German and Italian soldiers occupied Greece and its many islands when Greece fell in April 1941.

The next month, the allies also lost the island of Crete. When Italy surrendered to the Allies in September 1943, the British saw an opportunity to retake the Grecian islands, occupying Leros  that same month. By October, the British had 3.000 forces in place on the island.

The German effort to retake Leros began with nearly 50 days of air strikes followed by an amphibious landing on November. 12, 1943 and a drop of 500 parachutists, most of whom landed safely. During the night, more German reinforcements arrived.

Fighting on the 14th and 15th resulted in more casualties but no conclusion. On the night of the 15th, the Germans landed an additional 1,000 troops and artillery. Despite being outnumbered, the British managed to retake part of Apetiki, land an additional company and capture 170 German prisoners , marching them to Samos. On the morning of November 16, the British commander, Brigadier Robert Tilney here with the German Generel Friedrich Müller , surrendered 3,200 British soldiers and 5,320 Italian solders who had agreed to fight with the British. He had under his command the 234th Infantry Brigade and an assortment of RAF and Italian Army troops.

Alwin-Broder Albrecht one of Hitler’s adjutants.