The Biggest Maritime Disaster Ever: The M.V. Wilhelm Gustloff.

Operation Hannibal was the naval evacuation of German troops and civilians from Courland, East Prussia, and Danzig-West Prussia as the Red Army advanced. The MV Wilhelm Gustloff‍ ‘s final voyage was to evacuate German refugees and military personnel as well as technicians who worked at advanced weapon bases in the Baltic from Gdynia, then known to the Germans as Gotenhafen, to Kiel.

the founder of the Swiss NSDAP/AO, the Nazi Party organisation for German citizens abroad, at Davos. He remained its leader from 1932 until he was assassinated on 04-02-1936, age 41. Gustloff was shot and killed in 1936 by David Frankfurter, 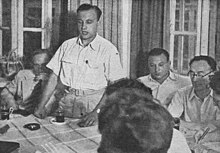 a Croatian Jewish student incensed by Gustloff’s antisemitic activism. Adolf Hitler and all high Naizies attented his funeral. Frankfurter died in Israel, in the city of Ramat Gan on 19 July 1982 aged 73.

Constructed as a cruise ship for the Nazi KDF, Kraft Durch Freude “Strength Through Joy” organisation in 1937, she had been requisitioned by the Kriegsmarine in 1939. She served as a hospital ship in 1939 and 1940. She was then assigned as a floating barracks for naval personnel in Gdynia before being put into service to transport evacuees in 1945.

The ship’s complement and passenger lists cited 6.050 people on board, but this did not include many civilians who boarded the ship without being recorded in the official embarkation records. Heinz Schön a surviver

concluded  that the Wilhelm Gustloff was carrying a crew of 173, 918 officers, NCOs, and men of the 2 Unterseeboot-Lehrdivision, 373 female naval auxiliary helpers, 162 wounded soldiers, and 8.956 civilians of which an estimated 5.000 were children, for a total of 10.582 passengers and crew.

The ship left Gotenhafen early on 30 January 1945 and the ship and her escorting torpedo boat were soon sighted by the Soviet submarine S-13, under the command of Captain Alexander Marinesko. Marinesko

followed the ships for two hours before launching three torpedoes at Wilhelm Gustloff‍ ’s port side about 30 km, hitting it with all three.

The first torpedo caused the watertight doors to seal off the bow which contained the crews’ quarters where off-duty crew members were sleeping. The second torpedo hit the accommodations for the women’s naval auxiliary (located in the ship’s drained swimming pool); only three of the 373 quartered there survived. The third torpedo was a direct hit on the engine room, cutting all power and communications.

Reportedly, only one lifeboat was able to be lowered, the rest had frozen in their davits and had to be broken free with some lost when they fell or capsized as a result of the panic.

The figures from the research make the total lost in the sinking to be about 9.343 total, including about 5.000 children. This would represent the largest loss of life resulting from the sinking of a single vessel in maritime history, 996 people survived.

The only known Dutch passenger, a man from my hometown Eindhoven, on board of the Gustloff, Gijsbert “Gijs” Visscher was a resistance man who escaped from a prison camp, reached the harbour, smuggled on board and survived. Back home his further life was branded by this horrible event.

Before sinking Wilhelm Gustloff, captain Alexander Marinesko was facing a court martial due to his problems with alcohol and was thus deemed “not suitable to be a hero” for his actions and was instead awarded the Order of the Red Banner. Marinesko died age 50 on 25-11-1963 of lung cancer in Leningrad.