also Mussfeld, and Erich Mußfeldt, (18 February 1913 – 28 January 1948) was a German non-commissioned SS officer serving in two extermination camps during World War II in occupied Poland, including at Auschwitz as well as at the Majdanek concentration camp 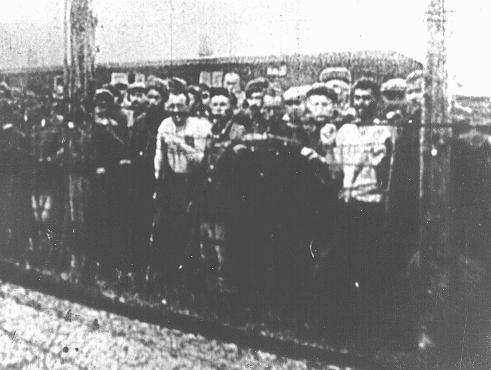 . He was arrested and charged by the Allies originally in 1946, then transferred to Poland where the full extent of his war crimes was revealed thanks to new evidence. He was retried by the Supreme National Tribunal at the Auschwitz Trial in Kraków, and found guilty of crimes against humanity. Muhsfeldt was sentenced to death by hanging in December 1947, and executed on 28 January 1948.

Eric Muhsfeldt was born on 18 February 1913. At the time of his service in the SS-Totenkopfberbände

he was reportedly married with one son. The fate of his wife is unclear. According to Miklós Nylszli

, his wife was killed in an air raid, and his son sent to the Russian front. Nyiszli himself died of a heart attack on 5 May 1956, age 54.

Originally Muhsfeldt served with the German SS-Sonderkommando at Auschwitz in 1940. He was transferred to the work/extermination camp at Majdanek on 15 November 1941. He was involved in the final mass shooting of the camp’s remaining Jewish inmates known as the Operation Harvest Festival or “Erntefest”.

It was the largest single-day, single-camp massacre of the Holocaust, totalling 43,000 in three nearby locations, ordered by Sturmbannführer Christian Wirth

.  When the Majdanek camp was liquidated, he transferred back to Auschwitz, where he then served as supervising SS officer of the Jewish Sonderkommando in Crematorium II and III in Auschwitz II “Birkenau).  Wirth was killed on 26 May 1944, age 58, by Yugoslav Partisans while travelling in an open-topped car on an official trip to Fume. He was buried with full military honours in the German Military Cemetery in Opcina, near Trieste.

Upon his return to Auschwitz, Muhsfeldt, a committed mass murderer, had an unusual relationship with renowned Jewish-Hungarian pathologist Miklas Nyiszli, who was forced to carry out autopsies on behalf of Josef Mengele.

Nyiszli survived the war and later gave evidence about what happened at Auschwitz. Nyiszli described one incident when Muhsfeldt came to him for a routine check-up, after shooting 80 prisoners in the back of the head prior to their cremation. Nyiszli commented that Muhsfeldt’s blood pressure was high, and inquired as to whether this could be related to the recent increase in “traffic”, as the mass murder of newly arrived victims was euphemistically called. Muhsfeldt replied angrily that it made no difference to him, whether he shot one person or eighty. If his blood pressure was too high, it was because he drank too much he said.

Nyiszli described an exceedingly rare occurrence, in which an inmate girl 15 or younger due to highly unusual circumstances, managed to survive the gas chamber and, with medical help from Nyiszli and others after she was discovered alive, was partially recovering. Nyiszli took up her case with Muhsfeldt asking that her life be spared. Muhsfeldt replied “There’s no way of getting round it, the child will have to die.” Nyiszli explains that “Half an hour later the young girl was led, or rather carried, into the furnace room hallway, and there [Muhsfeldt] sent another in his place to do the job. A bullet in the back of the neck…”

After the war had ended, Muhsfeldt was arrested

and charged by the War Crimes Group, European Command initially. He was retried in Kraków by the Supreme National Tribunal in 1947, where he was sentenced to death for his war crimes. He was executed by hanging on 28 January 1948, age 34.

Hitler's Siegfried was gay and married a Jewess lady.
Jürgen Stroop, the destructor of the Warsaw ghetto.