was one of ten children in the Watt family. Douglas was a war volunteer and joined the Royal Canadian Air Force

after the outbreak of World War II, as many young Canadian guys did. 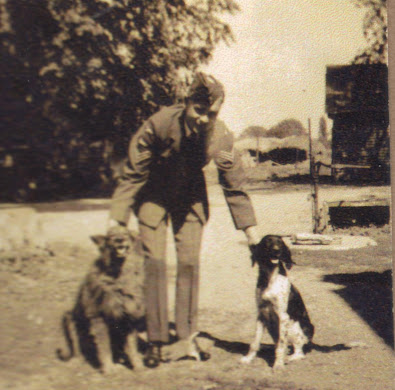 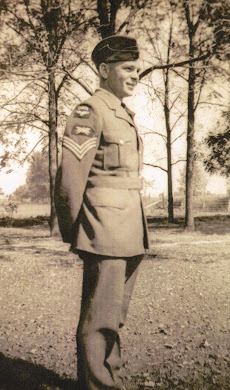 Douglas had three brother, Leonard “Lenard”, born 06-05-1919, he was an Instructor at Dunnville and Aylmer Air Schools prior to flying in WWII, as a flight spitfire pilot, J6381 RCAF. Lenard enlisted the same day as Douglas. He received many awards. After the war Leonard lived in Glren Huron and was a successful farmer. He married and had six children, but one died shortly after birth. Lenard died in a car accident, most likely he had a heart attack, on 09-05-2000, age 81. James and Earl, also Air Force men and fighting over Europe, James Hugh a squadron leader was shot down during a Coastal Patrol above the coast of Scotland on 05-02-1942, age 28, crashed in the sea and is never found.

Douglas’s brother Earl was serving in a bombing squad and was involved in the big bombardments of Hamburg and Dresden. Earl a bomber navigator was on his way to Hamburg for a new bombardment and landed after a crash on Germany territory in 1943 and was a prisoner of war in the famous castle Cholditz for two years. Chris Cunningham a great nephew of Earl reported me that Earl died in September 2012, age 90, in Pelee Island, Ontario and is buried next to the memorial stone of his brothers. Chris also kindly sent me all the family photo’s and documents, of the brothers.

Three heroes in one family.
Another brother Howard Alexander, born 26-10-1926, enlisted when he was 15 years. He was a cadet in training, but the war ended before he was sent overseas. He went to a successful engineer building highways and dams. He married and had two children, but unfortunately he died very young when visiting Lenard’s farm, age 33, 01-03-1960.

, nickname “Ceylon” , was on his way to Germany, passed the coastline of Holland and above Luijksgestel, in the South of Holland, ten miles from my hometown, as the Halifax collided with a Lancaster of the 44th Bombing Squadron

, age 25. Douglas was recognized by a ring with inscription. Douglas, age 26 and the whole crew is buried in one row on the English war section, of the local cemetery “Oude Toren” in Woensel, Eindhoven, my birthtown.

One day I heard that a group of Canadians were coming to Holland to visit the war cemetery, one of them was the cousin of Douglas, Sheila, with her husband Jim. Sheila White wanted to visit the grave of her cousin. I gave them all the information as they didn’t know too much of the exact crash, in 1943. I put a bag with information against the gravestone. We became friends and I adopted the grave.

On 04-05-1996, the 4th of Mai is our National “War Victims” Remembrance Day, Mayor Rein Welschen and the Dutch Commanding General Wilde, specially honored the grave of Douglas. Meanwhile Jim White passed away and Sheila, 91, is living in a olders home and I still give my regular attention to Douglas’s grave and his comrades. His friend Bob Wallace, see picture, was a victim too in another crash. Another forgotten hero. Ad van Zantvoort from Eindhoven, a WW2 aircraft crash researcher, reported me that he found the exact location where the Halifax crashed, near Luijksgestel and found a lot of pieces of wreckage of the aircraft. He offered me a pair of components of the Halifax. A 4 lb incendiary container holder and a part of a fuel pipe.

We visited the crash spot with three Canadian family members on May 17th 2015 as they came over to visit his graveside in Eindhoven.

There is a memorial stone for Douglas Hubert and James Hugh Watt, on the North Bay Cemetery, Pelle Island, Ontario.