was an American film actor who appeared mostly in Western and action pictures.  The son of Marion Lavinia Van Fleet and Clarence LeRoy Van Cleef. At age 17, he obtained his high school diploma early in his senior year at Somerville High School in order to enlist in the United States Navy

in September 1942. After basic training and further training at the Naval Fleet Sound School, Van Cleef was assigned to a submarine chaser and then to a minesweeper, USS Incredible,

on which he worked as a sonarman. (sound navigation ranging). The ship initially patrolled the Caribbean, then moved to the Mediterranean, participating in the landings in southern France. In January 1945, USS Incredible moved to the Black Sea, and performed sweeping duties out of the Soviet Navy base at Sevastopol, Crimea. Afterwards the ship performed air-sea rescue patrols in the Black Sea before returning to Palermo, Sicily. By the time of his discharge in March 1946, he

had achieved the rank of Sonarman First Class (SO1)

and had earned his mine sweeper patch.

He also had been awarded the Bronze Star

and the Good Conduct Medal. By virtue of his deployments, Van Cleef also qualified for the European-African-Middle Eastern Campaign Medal, Asiatic-Pacific Campaign Medal, the American Campaign Medal, and the World War II Victory Medal
After the war he worked as an office administrator, becoming involved in amateur theatrics in his spare time. He became an actor and his first film was the classic Western High Noon, in which he played a villain. Van Cleef played one of Lee Marvin‘s

villainous henchmen in the 1962 John Ford classic The Man Who Shot Liberty Valance, with James Stewart

. In 1962 he also had a serious car accident. He also plated a role in the war movie Commandos, 1968, about the battle against Marshal of the Panzer Troops 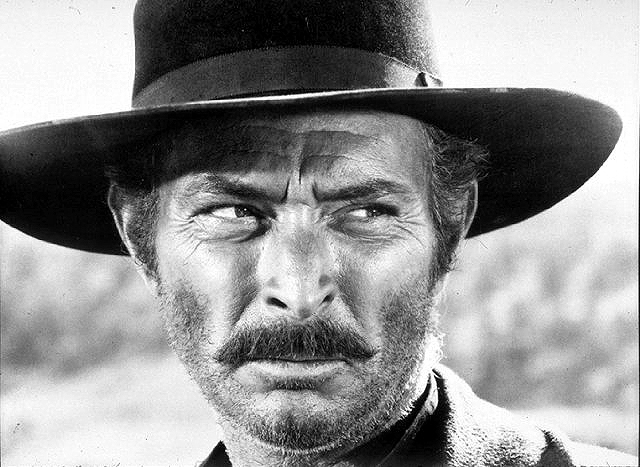 He lost the last joint of the middle finger of his right hand while building a playhouse for his daughter. In 1958, a severe car crash nearly cost Van Cleef his life and career. A resulting knee injury made his physicians think that he would never ride a horse again. This injury plagued Van Cleef for the rest of his life and caused him great pain. His recovery was long and difficult and halted his acting for a time. He then began a business in interior decoration with second wife Joan, as well as pursuing his talent for painting, primarily of sea and landscapes.
Despite suffering from heart disease from the late 1970s and having a pacemaker installed in the early 1980s, Van Cleef continued to work in films. He died from a heart attack, throat cancer was listed as a secondary cause of death, at the age of 64, on 16-12-1989, in Oxnard, California and was interred in Forest Lawn, Hollywood Hills Cemetery in Los Angeles. His gravestone reads “Lee Van Cleef, 09-01-1925 – 16-12-1989 ‘Best of the Bad’ Love and Light”.