, a five months after Adolf Hitler. Silvester as a Major was Awarded for actions during World War I. The President of the United States of America, authorized by Act of Congress, 09-07-1918, takes pleasure in presenting the Distinguished Service Cross to Major (Infantry) Lindsay McDonald Silvester, United States Army, for extraordinary heroism in action while with 30th Infantry Regiment, 3rd Infantry Division, nicknamed “Rock of Marne”

and who died age 69, on 23-10-1927, serving in the Bois-d’Agrimont, France, 15-07-1918. During the intense bombardment preceding the German drive of 15 July when the wounded were so numerous that is was impossible to care for them in the dressing station, Major Silvester voluntarily gave up his dugout for the use of the wounded and exposed himself to heavy fire during the ten hours’ terrific bombardment. After leading his command across the Marne this officer directed the reduction of a number of machine-gun nests and advanced his lines 4 kilometers despite the determined resistance. During the war two members of the division were awarded the Medal of Honor. Casualties during the great war were 3.177 killed in action with 12.940 wounded. Lindsay Silvester was the commanding officer of the 66th Infantry Regiment from 18-02-1937 until 03-03-1937. In July 1941 assigned as commanding officer of the 1st Tank Group

until March 1942. In March 1942 Silvester was appointed commander of the famous 7th Armored Division. Silvester with the 7th Division, nicknamed “Lucky Seventh”

. The battle of Overloon ensued as the Allies in Operation Aintree advanced from nearby positions south toward the village of Overloon. After a failed attack on Overloon by the U.S. 7th Armored Division, the British 3rd Infantry Division, nickname “Iron sides”

and the British 11th Armoured Division, nickname “The Black Bull”

took over. The 11th Armoured Division was disbanded at the end of January 1946. During the campaign in northwestern Europe, it lost 1.820 killed and more than 8.000 wounded. Its rotation in tanks was 300%. After D-Day 3rd Division fought through the Battle of Normandy the Netherlands and later the invasion of Germany. For the campaign in Normandy, the division was commanded by Major General Tom Rennie until 13-06-1944. During the often intense fighting from Sword Beach to Bremen, the Division suffered 2.586 killed. Their opponents in Overloon, the German 1st Parachute Army

under Generaloberst, Kurt Student played a vital role in delaying the Allied advance across the south of the Netherlands. The 3.000 paratroopers were likely the only combat-ready reserve forces in Germany at the time. The battle, which resulted in an Allied victory, ensued after the Allies launched Operation Aintree. The Allies went on to liberate the town of Venray. 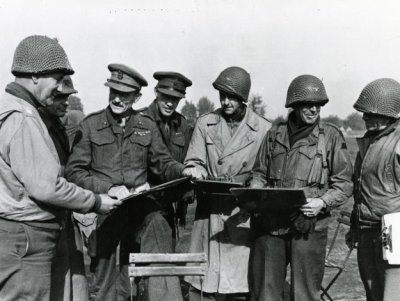 Silvester here on the left with English officers before the battle. During the battle, the village of Overloon was destroyed. In and around Overloon, some 2.500 soldiers died, the Allied lost 1.878 men, 3 aircrafts and 40 tanks, the Germans lost 600 men, making it one of the bloodiest battles in the Netherlands during World War II. 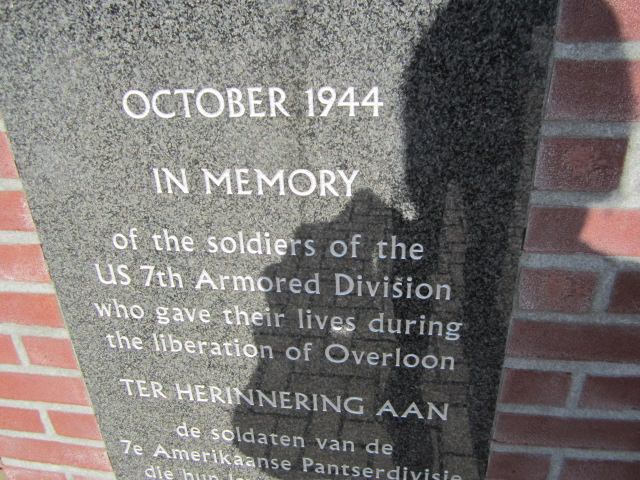 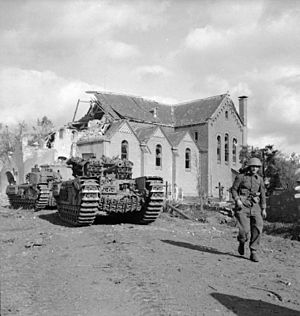 living in Norfolk County, Virginia, died at the age of 73 and is buried with his wife Mildred, born Turner, who died age 78, on her birthday on 09-11-1970, on the Arlington National Cemetery in Section 11.