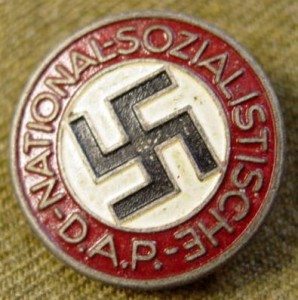 Schmidt, Kitty, better known as Madame Katharina Zammit, born in 1882 in Berlin, the daughter of a butcher became the owner of Berlin’s top brothel the ‘Pension Schmidt’ located at No.11, Giesebrecht Strasse. It was later renamed ‘Salon Kitty’ when taken over by the S.D.(Secret Service)

. It became the very epitome of relaxation for high ranking officers and visiting diplomats. Fitted out with hidden microphones, this sophisticated surveillance system became the main source of Gestapo

The idea to use Salon Kitty for espionage purposes came from Reinhard Heydrich,

did most of the work. Instead of infiltrating the brothel, Schellenberg decided to take it over.

Kitty Schmidt, here with her daughter

had been sending money to British banks with fleeing refugees ever since the Nazis took over. When she eventually decided to leave the country on 28-06-1939, SD agents arrested her at the Dutch border and took her to Gestapo HQ. There Schellenberg made her an offer she could not refuse: either cooperate with the Nazis or be sent to a concentration camp.

The SD closed the brothel for repairs and refurbished it with multiple concealed microphones in every conceivable place. Wires were led to a cellar and from there to a room with five monitoring desks and recording turntables. The idea was to entertain prominent guests with wine and women so they would disclose secrets or talk about their real opinions

Berlin’s vice squad “Sittenpolizei“ “vice squad”, arrested dozens of Berlin prostitutes and selected 20 potential agents for their use. They were put through seven weeks of rigorous indoctrination and training.

Among other things, they were trained to recognize military uniforms, and to glean secrets from innocuous conversation.They were not told about the microphones but had to make a report after every encounter.

In March 1940, Schmidt was told to continue as if nothing had happened – except that now she had a special book of twenty additional girls she should show only to a specific kind of clientele. If a customer would use a phrase “I come from Rothenburg”, she was instructed to show him the book and then let him make his decision and call for the girl he had selected. The girls would spend the night with the guest and depart later.

Salon Kitty became even more popular when selected guests in the military and diplomatic corps were told the “secret codeword” and monitors made thousands of records. One of the customers was Count Galeazzo Ciano

, Foreign Minister of Italy, whose forthright opinions about the Führer were not particularly positive.

On 11-01-1944, Count Ciano, age 40, was shot by firing squad at the behest of his father-in-law, Mussolini, under pressure from Nazi Germany

Another one, SS Oberstgruppenfùhrer Sepp Dietrich,

had been marked as a client by some. He, apparently, enjoyed the ‘lesbian displays’ that were otherwise considered anti-social acts outside of that context.

Reinhard Heydrich also made a number of “inspection tours” although the microphones were turned off on those occasions. However, British agent Roger Wilson, under his cover identity of Romanian press secretary Ljubo Kolchev, noticed when the wires were rerouted to another listening position. He became a regular customer of Salon Kitty, with a regular girl, and later arranged a wiretap to three cables. Now British intelligence heard some of the same conversations SD did. Wilson was later captured and sent to a POW camp.

As the war progressed, the clientele of Salon Kitty decreased.

In July 1942 a bomb demolished the building the brothel was in and Salon Kitty had to move to the ground floor of the same building. Within the year SD abandoned the project and handed Salon back to Schmidt – with the threat that she would keep silent or face retaliation. The 20 girls stayed with her. When in 1943 Operation Kitty ended, about 25.000 tapes were recorded. The tapes were lost later in the war. Next door, at No.12, was the apartment of Ernst Kaltenbrunner,

Chief of the SD. Kitty Schmidt did not talk about the matter even after the war or without revealing the identity of any of her former employees. Total number of Gestapo recordings from the brothel was estimated by the Stasi (East German Security Service) to be about 25.000. Virtually all of the recordings have since been lost or destroyed due to their post-war unimportance.

According to a 2005 article in Die Tageszeitung, the brothel continued to exist after World War II under the management of Schmidt’s son and daughter. In 1988, the former ‘Salon Kitty’ was in use as a Guitar Studio!, but Kitty Zammit- Schmidt died already in 1954, age 71 and is buried in Berlin, Heerstrasse .