united statesArmyBrigade General
Easley, Claudius Miller “Speck”, born on 11-07-1891 in  Thorp Spring, Texas, was a member of the first Basic Class of the newly established Infantry School, in 1919 and over the years, also was graduated from the Advanced Course of the Infantry School, the Command and General Staff College and the Army War College. He served with the 37th U.S. Infantry Regiment on the Mexican border. Soon after the United States’ entry into World War II, General Easley took command of the 325thInfantry Regiment of the 82nd Infantry Division. He left that unit to become the Assistant Division Commander of the 96th Infantry Division at the time of its activation in August, 1942, at Camp Adair, Oregon. The division gained the connotation of the “Deadeyes”

because of the high level of marksmanship it achieved through the training directed by General Easley. General Easley went overseas to the Pacific Theatre of Operations with the division in the summer of 1944. “For Exceptionally meritorious conduct” General Easley was awarded the Legion of Merit at the close of the Leyte campaign during which he had been wounded by sniper fire and awarded the Purple Heart. On 08-05-1945, he was awarded the Silver Star for gallantry in action on Okinawa Island. 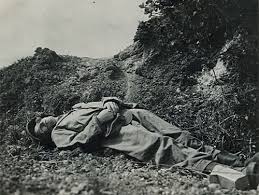 Horrace Logan “Mac” McBride. Casualties of the 80th: Total-6.029 and KIA-880 and WIA 5.149 in 239 days of combat in the campaigns: Northern France, Rhineland, Ardennes-Alsace, Central Europe.