The German World War I flying ace, aerobatics champion, and aircraft designer and manufacturer of the Fieseler FI.

Fieseler, Gerhard, born 15-04-1896 in Glesch, joined the Air Service of the German Army in 1915. Despite a crash during training hospitalizing him until February 1916, he was assigned as an observation pilot by October 1916, flying first with FFA 243, then with FFA 41. In 1917, he qualified as a fighter pilot and was posted on 12 July to the Macedonian front, initially flying a Roland D II

with Jasta 25. Royal Prussian Jagdstaffel 25, commonly abbreviated as Jasta 25, was a “hunting group” “fighter squadron of the Luftstreitkrafte, the air arm of the Imperial German Army during World War I. Fieseler scored his first aerial victory on 20-08-1917. A serious illness removed him from active duty from 21 September until 5 November 1917.

Fieseler would not score his second success until 30-01-1918. He was eventually credited with nineteen confirmed aerial victories, with three others unconfirmed. Commissioned in October 1918, he was the highest-scoring German ace on the Eastern Front to survive World War I.

He was awarded the Golden Military Merit Cross

and the Iron Cross,

Following the war, he returned to printing, but yearned to return to flying. In 1926, he closed his print shop in Eschweiler and became a flight instructor with the Raab-Katzenstein aircraft company in Kassel and continued to hone his flying skills, becoming an accomplished stunt pilot. In 1927, he performed a particularly daring routine in Zürich and started to command increasingly high fees for appearances. In 1928, he designed his own stunt plane, the Fieseler  F I, built by Raab-Katzenstein. He also designed Raab-Katzenstein 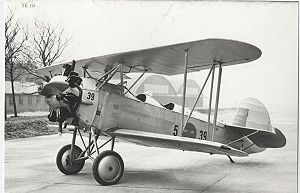 RK-26 Tigerschwalbe aircraft in the end of the 1920s which was offered and sold to a Swedish company called AB Svenska Järnvägverkstaderna (ASJA), which built 25 of the type for Swedish Air Force in the beginning of the 1930s.

In 1930, Raab-Katzenstien was bankrupt, and Fieseler decided to strike out on his own. Using money he had been saving from his aerobatics, he bought the Segelflugzeugbau Kassel sailplane factory and renamed it Fieseler Flugzeugbau. Although he continued with some sailplane manufacturing, from 1932, he set up to start manufacturing sports planes of his own design. In one of these aircraft, he went on to win the inaugural World Aerobatic Championship in Paris in 1934, taking home a FF 100.000 prize, which he invested into the company. A NSDAP member

Luftwaffe in 1935. Real success would come the following year, when he won a design contest for an STOL observation plane, Short Take-Off,  that he then went on to produce as the Fieseler F I 156 Storch.

From 1940 onward his company became increasingly involved in fighter production, principally the BF 109 and the Fw 190. The last Fieseler design was the Fi 103, better known as the V-I missile

, which was used to devastating effect against Great Britain in World War II until Fieseler’s factory was destroyed by Allied bombing.

produced aircraft for the German military throughout World War II. F, following the war, interned by U.S. forces immediately after the occupation of Kassel, Fieseler was held under harsh conditions for more than a year without being charged with any specific crime. (It appears that an honorary rank as colonel, awarded following his 1934 World Aerobatic Championship win, may have led the Allies to confuse him for a high-ranking Nazi. During internment he developed tuberculosis and came out of prison with diminished physical and mental health. Having suffered heavy financial losses as a result of the war, Fieseler here with the Generaloberst der Luftwaffe Ernst Udet

, disposed of his remaining business interests in 1950, following a protracted fight with the German government over his assets. He used his remaining assets to promote the sport of aerobatic flying, which he continued to be associated with until his death. When he was released, he re-opened part of this factory and spent some years building automotive components. He also published an autobiography, Meine Bahn am Himmel (My Road in the sky

). The aerobatic man-oeuvre Fieseler is named after him.