, entered the Army as a Company Officer in the 12th King’s Saxon Infantry Regiment 177

, on 24-02-1910, 20 years old. He ended his pilot training in 1916 and ends the first war as Squadron Leader of the 5th Combat Wing of the OKL. Doerstling is allowed in the new Reichswehr and with the outbreak of World War II as Chief of Affairs of Hermann Goering’s (did you know) Luftwaffe RLM  until 06-08-1943. Commanding General and Commander in Air Region Holland, (see About), with General der Flieger, Oberkommando Wehrmacht in the Netherlands, Massacre of Putten, Friedrich Christiansen 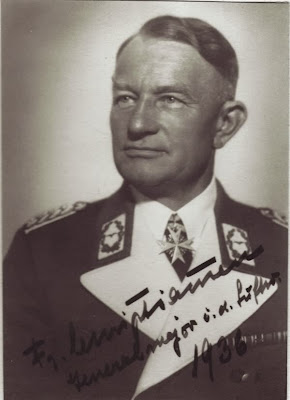 as Wehrmacht Commander, until 01-01-1944.
Christiansen was Wehrmachtbefehlshaber in den Niederlanden (Supreme Commander of the Wehrmacht in the Netherlands), and until 26-06-1943 was concurrently still Korpsführer of the NSFK.

In addition, from 10-11-1944 until 28-01-1945 supreme commander of the 25th Army. Christiansen also was responsible for the food embargo in winter 1944, the hunger winter, causing famine in western Holland resulting in the death of 22000 civilian men, women and children. After the war Christiansen was arrested for war crimes.

On 02-10-1944 he had ordered a raid on the village of Putten in Gelderland, the Netherlands, in retaliation, after one of his officers, a Leutnant Sommers, was killed there by the Dutch resistance. When he heard about the actions of the resistance near Putten, Christiansen is reported to have said, “Das ganze Nest muss angesteckt werden und die ganze Bande an die Wand gestellt!” (“Put them all against the wall and burn the place down!”) In compliance with this retributive sentiment, several members of the civilian population were shot, the village was burned, and 661 of the males of the town were deported to labor camps, the vast majority of whom never returned.

, only 49 survived.
Doerstling landed in the Führer Reserve (see Adolf Hitler) (did you know) to 28-02-1944. The Führer Reserve (“Officers Reserve”) was set up in 1939 as a pool of temporarily unoccupied high military officers waiting for new assignments in the German Armed Forces during World War II. The various military branches and army groups each had their own pool which they could use as they saw fit. The officers were required to remain at their assigned stations and be available to their superiors, but could not exercise any command function, which was equivalent to a temporary retirement while retaining their previous income. Especially in the second half of the war, more and more politically problematic, troublesome, or militarily incompetent officers were assigned to the Führer Reserve. Doerstling was assigned to Commanding General in Air Region Vienna, until his captivity by the American Forces, on 08-05-1945. Released on 22-11-1947, Doerstling retired in beautiful Garmisch Partenkirchen.

Doerstling, who was married with Sibylle* Adele Feodora Freiin von Reitzenstein, died at the age of 75, on 09-11-1965 and is buried with his wife, who died old age 92 on 18-09-1992, on the Stadtfriedhof of Partenkirchen, close by the graves of Generaloberst der Infanterie, Chief of the Troop Office, Wilhelm Adam, Generalleutnant der Gebirgstruppe, Commander of the 1st Mountain Division