, joined the Army as a Fahnenjunker in the 18th Bavarian Infantry Regiment, „Prinz Ludwig Ferdinand“

He was promoted to Leutnant and transferred end February to a Machine Gun Company.

He became 2nd Adjutant with the 6th Infantry Brigade. He ended the war as commander of the Staff Quarters of the 23rd Reichswehr Brigade.

He remained in the new Reichswehr

and at the beginning of World War II, commander of the 1st Battalion of the 62nd Infantry Regiment, until 06-02-1940 and involved in the invasion of Poland.

under General of the Artillery Willi Albin Moser 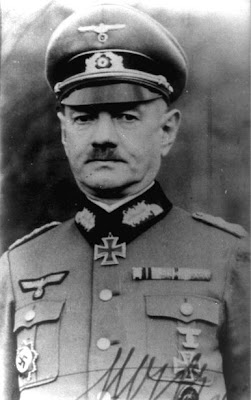 to 01-09-1942 as an Oberst meanwhile. Willi Moser was captured by Soviet troops in 1945 and died in Soviet captivity on 18-10-1946, age 58. Temporary in the Führer Reserve  (see Hitler) (did you know) Bürcky was assigned as commander of the School VII for Officer Aspirants of Infantry, in Milowitz near Prague, until 15-03-1944. From 15-03-1944 he came to Potsdam as commander of all Infantry Schools for Fahnenjunkers. Again a short time in the Führer Reserve and detached to the Division Leaders Course in Hirschberg, until 15-11-1944. Bürcky’s last command was of the 159th Infantry Division, where he succeeded Generalmajor der Reserve, Friedrich Wilhelm Dernen