was a highly decorated Generalleutnant in the Wehrmacht during World War II, who commanded several divisions. He was also a recipient of the Knight’s Cross of the Iron Cross with Oak Leaves

. He joined the Army as a Fahnenjunker in the 4th Kompanie of the 3rd Schlesian Infanterie-Regiment 156. He is involved in World War I and fighting on the battlefields in France. Borowietz is wounded twice 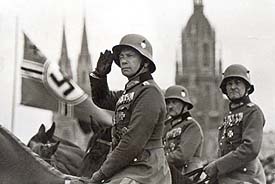 and lands in the Führer Reserve (see Hitler) (did you know). He is awarded with both the Iron Crosses

and other decorations. He is not allowed to remain in the new Reichswehr and has to leave the Army. He becomes a Oberleutnant of the Police in Breslau and on 11-08-1931 promoted on the High Police School in Eiche, as a Major. he reactivated in the Army, on 01-10-1935, in the Panzertruppen School. He participated in the invasion of Poland, the Western Front and the Balkan. As commander of the 50th Panzer Jäger Regiment he and Oberst der Panzertruppe, Wilhelm Heinrich von Apell

are called in the Wehrmacht announces. Panzerjäger, “armour-hunters” or “tank-hunters”,  was a branch of service of the Wehrmacht which were the anti tank arm-of-service who operated anti-tank artillery, and made exclusive use of the tank destroyers which were also named Panzerjäger.

They wore ordinary field-gray uniforms rather than the black of the Panzer troops; those Panzerjäger troops who crewed the tank-destroyers however wore the Panzer jacket in field gray.  Heavy, day and night, fighting’s in Tarnopol meanwhile with the 9th Panzer Division

and assigned with the command of the 15th Panzer Division

The division was commanded by 11 people during its total history. This included General der Artillerie, Kommandeur der 205th Infanterie Division

was called in the Wehrmacht announces for his excellent leading. For his bravery leading as a Generalleutnant in Tunis, he received the Knight’s Cross of the Iron Cross with Oak Leaves, on 10-05-1943. On the same day he in Tunis is captured by the British Forces and temporary in the POW English Island Park Camp 11 with other Generals.

. He then is transferred to the Camp Media, in Texas USA.

“Borowietz was in reality an old-school German General but he was also a very loyal soldier of the Führer, and even as a POW his writings indicate that he was perfectly committed to a Nazi victory. His letters make a strong point always about his “beliefs”, Germany and “We know what we are fighting for!” His wife, Eva Ledien however, was of Jewish descent and and she committed suicide in October 1938 so that their children could be Aryanized. This freed Willibald to follow his career. Eva’s sister, Käthe (Ledien) Bosse, was killed in Ravensbrück concentration camp on 16-12-1944.

Willibald  Borowietz died after a car accident, at the age of 51 on 01-07-1945, in Clinton, Mississipi. Borowietz is buried with honor on the war cemetery of Fort Benning, Georga, USA. Section A-2 Grave 83. 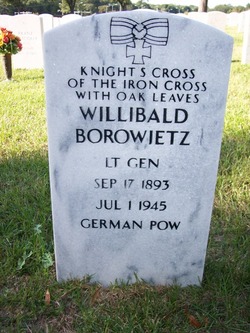