and his mistress Clara Petacci,

together with other fascist leaders, were travelling in a German convoy near the village of Dongo on the north western shore of Lake Como. A group of local communist partisans led by Pier Luigi Bellini delle Stelle

attacked the convoy and forced it to halt. The partisans recognised one Italian fascist leader in the convoy, but not at this stage Mussolini, and made the Germans hand over all the Italians in exchange for allowing the Germans to proceed. Eventually Mussolini was discovered slumped in one of the convoy vehicles. later said that: his face was like wax and his stare glassy, but somehow blind. I read utter exhaustion, but not fear…Mussolini seemed completely lacking in will, spiritually dead.

The partisans arrested Mussolini and took him to Dongo, where he spent part of the night in the local barracks. In all, over fifty fascist leaders and their families were found in the convoy and arrested by the partisans. Aside from Mussolini and Petacci and, her brother Marcello, sixteen of the most prominent of them would be summarily shot in Dongo the following day and a further ten would be killed over two successive nights. Clara Petacci, Mussolini’s mistress, was captured and executed with him.

In any event, Luigi Longo

, an Italian communist politician and secretary of the Italian Communist Party instructed a communist partisan of the General Command, Walter Audisio 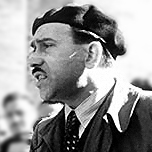 , to go immediately to Dongo to carry out the execution of Mussolini. According to Longo, he did so with the words “go and shoot him”. Longo asked another partisan, Aldo Lampredi

, to go as well because, according to Lampredi, Longo thought Audisio was “impudent, too inflexible and rash”. They drove a short distance to the village of Giulino de Mezzegra. The vehicle pulled up at the entrance of the Villa Belmonte on a narrow road known as via XXIV maggio and Mussolini and Petacci were told to get out and stand by the villa’s wall. Audisio then shot them at 4:10 pm with a machine gun borrowed from accomplice Michele Moretti

, his own gun having jammed. Audisio had no order to kill Clara Petacci, but as she tried to protect Mussoline in an embrace, screaming “Don’t do it”, she, age 33, was shot too, against the wall of the villa. 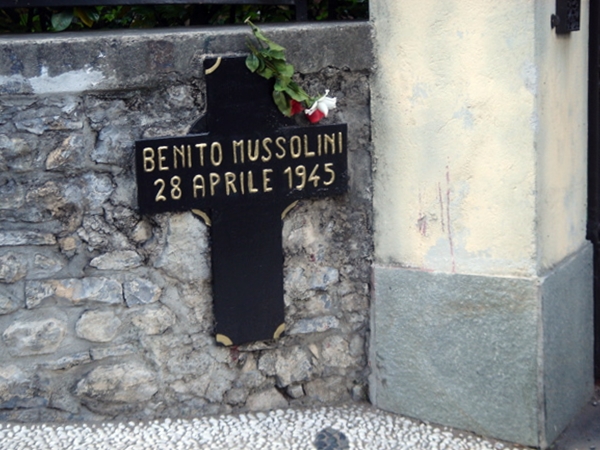 In the evening of 28 April, the bodies of Mussolini, Petacci, and the other executed Fascists were loaded onto a van and trucked south to Milan. On arriving in the city in the early hours of 29 April, they were dumped on the ground in the Piazzale Loreta, a suburban square near the main railway station. The choice of location was deliberate. Fifteen partisans had been shot there in August 1944 in retaliation for partisan attacks and Allied bombing raids, and their bodies had then been left on public display. At the time, Mussolini is said to have remarked “for the blood of Piazzale Loreto, we shall pay dearly”.

Their bodies were left in a heap, and by 9 am a considerable crowd had gathered. The corpses were pelted with vegetables, spat at, urinated on, shot at and kicked; Mussolini’s face was disfigured by beatings. An American eye witness described the crowd as “sinister, depraved, out of control”. After a while, the bodies were hoisted up on to the metal girder framework of a half-built Standart Oil service station

, and hung upside down on meat hooks. This mode of hanging had been used in northern Italy since medieval times to stress the “infamy” of the hanged. However, the reason given by those involved in hanging Mussolini and the others in this way was to protect the bodies from the mob. Movie footage of what happened appears to confirm that to be the case.

After his death and the display of his corpse in Milan, Mussolini, 61 years old, was buried in an unmarked grave in the Musocco cemetery, The re-interment in the Mussolini family crypt in Predappio was carried out on 1 September 1957, with supporters present giving the fascist salute. Mussolini was laid to rest in a large stone Sarcophagus. The tomb is decorated with fascist symbols and contains a large marble head of Mussolini. 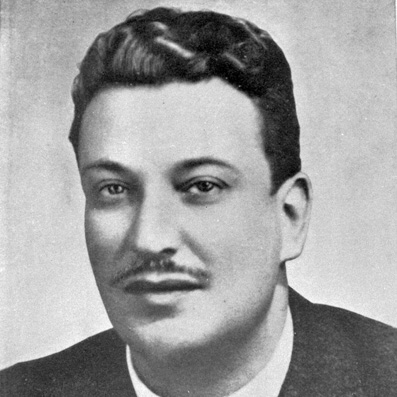 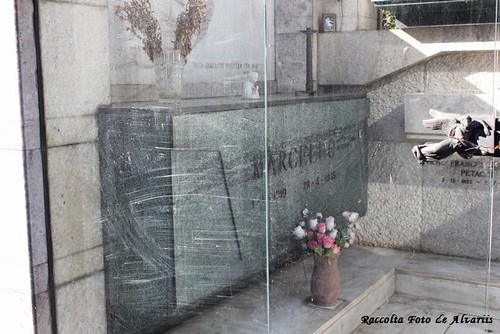 Clara’s brother was captured with Mussolini and Petacci. But, rather than being executed in Dongo, he was shot in the water of the Como lake while trying to escape.

When Adolf Hitler heard how Mussolini was executed and put on public display, he vowed he would not let this happen to him. A few days later Hitler possible shot his mistress and new wife Eva Braun or she swallowed some poison. He shot himself in the mouth, while also swallowing poison. Following Hitler’s orders their bodies were placed in a shell hole outside of his Berlin bunker and burned.

Bernardus Andreas "Dries" Riphagen, a Dutch criminal who collaborated with the Germans
Famous photo, Otto Funk and his unit in Normandy