Adolf Hitler was born in Austria-Hungary in 1889, however his family moved to Germany when he was three-years-old. From a young age, he became obsessed with German Nationalism, and early on expressed strong anti-Semitic sentiments. Some of his views can be construed as vague, as he also stood staunchly opposed to both capitalism and communism. Many view his early beliefs as a way to rebel against his authoritarian father. His father had served the Austrian government and wished his son to do the same. However, despite living on the border between Austria-Hungary and Germany, Hitler ignored his roots.

In the First World War, Hitler served Germany in France and Belgium. He fought in a number of the major battles on the Western Front, as a messenger and was twice decorated for bravery. After the war, Hitler became associated with the German Workers’ Party, which shared his same ideals. He became known even outside the party for his passionate speeches opposing the Treaty of Versailles, Marxists, and the Jewish people. Hitler impressed his party early on and by 1921, he became leader of the newly renamed National Socialist German Workers Party, known more simply as the Nazi Party.

Munich at the time was a breeding place for German Nationalism. Local businesses, army officers, and much of the German elite were looking for ways to undermine the Weimar Republic. Hitler’s powerful speeches attracted attention, and he was welcomed into Germany’s influential circles, and viewed as a feasible solution to problems with the current government. On November 8th 1923, Hitler attempted a coup, which is now known as the “Beer Hall Putsch.” Hitler and a large group of his party’s paramilitary soldiers stormed into a beer hall in Munich filled with three thousand people. Hitler claimed a national revolution had broken out, and the government had been toppled. However, the night was filled with confusion and by the next morning, Hitler and those involved with the uprising realized it was going nowhere. Hitler was soon after captured and charged with high treason.

Hitler’s trial and imprisonment gave the Nazis national attention. Hitler’s defence speech was filled with nationalistic sentiments, and his popularity soared as he entered prison. By the time of his release, Hitler had written his infamous book “Mein Kampf” or “My Struggle.” He had also changed his outlook on revolution. Hitler vowed to do everything by the book, and rise to power through the Weimar Republic’s system, rather than by violent revolution. 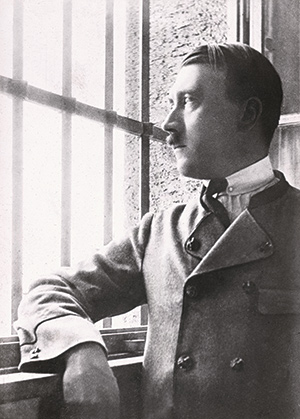 It was in 1930 when the Nazi Party would experience a political turning point. In the span of one election, the party grew from the ninth smallest party in parliament to the second largest. In 1932, Hitler ran for President. Despite losing to Paul von Hindenburg, he was increasingly seen as a realistic alternative in German politics. After being subject to increasing pressure, Paul von Hindenburg named Adolf Hitler the Chancellor of a coalition government on January 30, 1933. This date is now commonly associated with the end of the Weimar Republic, and the beginning of Hitler’s Third Reich.

Not long after Hitler’s appointment, there was a mysterious, Marinus van der Lubbe ?? fire in the building that housed Germany’s parliament, the Reichstag. Hitler’s government consequently signed the Reichstag Fire Decree, which suspended the basic rights of German citizens. This gave the government the legal right to imprison anyone considered a Nazi opponent. Hitler then installed the Enabling Act, which legally turned Germany into a dictatorship.

Hitler subsequently made the Nazi Party the only legal party in Germany by banning opposing parties or forcing them to dissolve completely. After the death of President Von Hindenburg in August of 1933, Hitler was handed the presidency by his cabinet. In less than a year, Adolf Hitler had secured supreme political power in Germany.