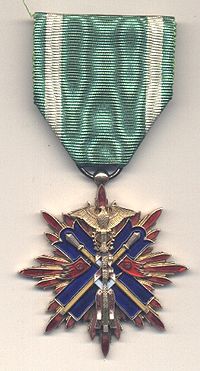 , but resigned after only 4 months. In 1944, Ugaki left politics and accepted the post of principal of Takushoku University, which he held throughout the war years. After World War II, along with all former members of the Japanese government, Ugaki was purged from public service and arrested by the American Occupation authorities.

However, he was never charged with any war crimes, and was soon released.

In 1953, Ugaki ran for public office on a national ticket and was elected to the House of Councillors in the post-war Diet of Japan with an overwhelming vote. Ugaki died on 30-04-1956, age 87, at his summer villa in Izunokuni, Shizuoka. His grave is at Tama Cemetery, in Fuchu, Tokyo. Also buried there are close General, Korechika Anami, the Russian spy, Richard Sorge, Admiral, Nishizo Tsukahara, Admiral, Isoroku Yamamoto and General, Tomeyuki Yamashito.