Sinclair, Albert Michael “Mike”, born in 1918. His father was a soldier and his mother came from a military family. Mike had two brothers, John, the youngest, and Christopher the eldest. All three served in WW2 with distinction. John was killed at Anzio in 1944 and Christopher, despite being captured by Rommel’s forces Erwin Rommel escaped and was awarded an MC. Christopher retired a Lieutenant Colonel. Mike participated in many successful escapes from POW Camps, the ‘Franz Joseph’ escape, the ‘60 Second Terrace’ escape to name but a few, but never managed a Home Run. Ultimately freedom came when he paid the ultimate sacrifice.

On 25-09-1944 Mike successfully climbed the wire whilst in the exercise area in the Tiergarten but was shot dead a few yards later on his approach to the high stone wall. 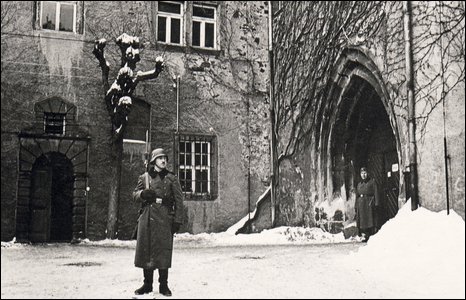 It was a very risky escape, which had been successfully carried out by the French Lieutenant Pierre Mairesse Lebrun in the Summer of 1941, but it was a calculated risk. Mike stumbled and lost his footing which slowed him down. Many leaves cover this area in Autumn. The following is an extract from a moving tribute from the camp’s Church of England Padre which he delivered at Mike’s memorial service: “Mike” came from an Ulster family living in England. He was at school at Winchester, went up to Cambridge, and joined the 60th just before the war. He fought at Calais, was taken prisoner, was sent to Laufen and there to Poland. There he made his first escape in which he crossed the frontiers of the General Government, Slovakia, Hungary, Yugoslavia, and was caught getting into Bulgaria. He tried to escape on the way back through Czecho-Slovakia, was recaptured, held for a time by the Gestapo, and finally sent to here two and a half years ago. Since then his life has been practically one attempt after another to escape. On different occasions he got as far as Cologne, the Swiss Frontier and the Dutch frontier. You know better than any congregation in the world what that means. About a hundred of you have got right away from a camp once, only about twenty more than once – let alone over a frontier – and this is the “Escapers” camp. 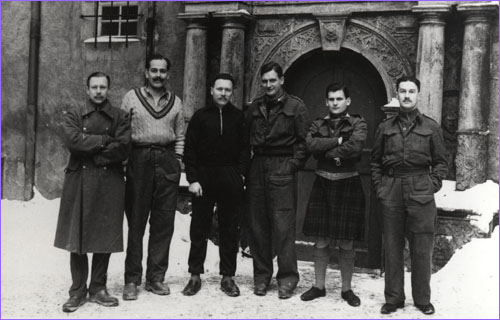 He didn’t himself take foolhardy risks, but when he went with others and risks were unavoidable he took full share – and more. You remember his escape as Franz Josef. And in his last and riskiest attempt he went alone. Whenever the story of escaping in this war is written, Mike Sinclair’s name will be there, high up on the list. And he deserves it because he had qualities that really ultimately matter. When he made his mind up on a thing he was absolutely determined to carry it through. He made mistakes, as we all do, but he learnt from them he had a conscience about them. Most people’s reaction to failure is to wipe it out of their memories and be comfortable. Mike’s reaction was NOT to forget it – and at times it made him very depressed – but to go on trying till he’d made up for it. That is the kind of character that really matters in a soldier”.Sinclair was the only person to be killed while attempting to escape Colditz.

The Germans buried Sinclair in Colditz Civil Cemetery with full military honours, his coffin was draped with a Union Flag made by the German guards and he received a seven-gun salute. Mike, age 26, was buried in the town cemetery. He in 1947 was reburied in Berlin’s British Military Cemetery, Charlottenburg.