united statesArmyBrigade General
Simpson, Bethel Wood “Simp” for his friends, born 11-07-1888 in Michigan, the son of Wendell Lee Simpson. He was a 1911 graduate of the United States Military Academy

. As a cadet his fine logical mind, honesty, self control, most pleasing personality and energy secured for him a most creditable scholastic record. He served in World War I and World War II. Brigadier General Bethel Wood Simpson, Leader in Ordnance personnel and training in World War II at Aberdeen and Santa Anita.

He became from 1936-1941 Chief of Personnel Division, Office of the Chief of Ordnance. Simpson was transferred in 1941-1942 Commandant of Ordnance Replacement Training Centre from 1942 until 1944, as he was Attached to Ordnance Office at Headquarters Army Ground Forces, till the end of the war. From 1945 he was member of Joint Production Survey Committee.

Brigadier General a friend, roommate at West Point, and sincere admirer I personally, his classmates and his host of friends, together with his wife May Byrne Simpson; his son Colonel Charles L. Simpson, United States Army, and his daughter Mrs. Wyatt Flock, Jr., said that he indeed suffered a great and irreparable loss. To all it is a treasured memory to have known Bethel Wood Simpson. 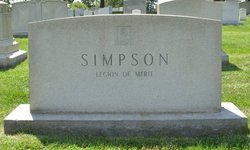