(did you know) was the Gauleiter of Berlin, participated in World War I and ended the war as commander of the Panzerzüge of the Ostsee-Division, Panzerzüge are armed trains. He came in the new Reichswehr

and in 1937 von Ahlfen became teacher on the Kriegsakdemie. At the beginning of World War II, von Ahlfen was in the Staff of the Pioneers and Fortresses, but was ordered to active service on 01-07-1940. He became the commander of the 40th Motorized Pioneer Battalion.

, which brought him much reputation. He lost this position because of the influence of Gauleiter of Breslau Karl Hanke,

never to visit “a camp in “Upper Silesia” he meant Auschwitz for any reason. SS Hauptsturmführer, Josef Mengele

infamous for performing human experiments on camp inmates in Auschwitz, including children, for which Mengele was called the “Angel of Death”. Hanke had “seen something that he was not allowed to describe and indeed could not describe Magda Goebbels

was rumored to have had affairs with Goebbels’s deputy Karl Hanke. 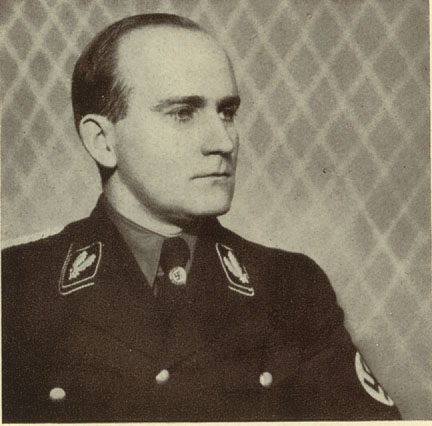 (see William Hitler) and sixty year old, Volkssturm “soldiers”, was already surrounded by the Russians and lost. Gauleiter Hanke forbid the local people to leave the city, but he himself escaped with his private plane, Hanke had flown out the previous day in a small Fieseler Storch plane kept in reserve for him. In his memoirs, German Minister of Armaments, Albert Speer, he succeeded Minister for armament and munitions, Leader of the Organisation “ Fritz Todt”,

claimed that he heard from Anton Flettner

the designer, who died age 76, on 29-12-1961, in New York, that Hanke actually escaped in one of the few existing prototype helicopters tested by Hanna Reitsch.

Hanke was liquidated on 08-06-1945, age 41, either by the Chechs, or beaten to death or shot by the Americans?. General Hermann Niehoff died old age 83, on 05-11-1980 in Ringsee. A few weeks later von Ahlfen got the command as General der Pioniere in the Army Group B

On 6 May, after 82 days of siege and shortly before the uncondional surrender of Germany, General Niehoff relinquished Festung Breslau to the Soviets. During the siege, Soviet forces inflicted approximately 30.000 civilian and military casualties and took more than 40.000 prisoners, while suffering 6.000 total casualties. Breslau was the last major city in Germany to surrender, only two days before the end of the war in Europe. Gauleiter.

Von Alfen was high decorated and lived in the little town of Oberndorf, along the river Neckar, where he died at the age of 69, on 11-09-1966 and is buried, with his wife Paula von Ahlfen, born Krauth, who died old age 88, on 11-02-1998, on the small village cemetery of Oberndorf.